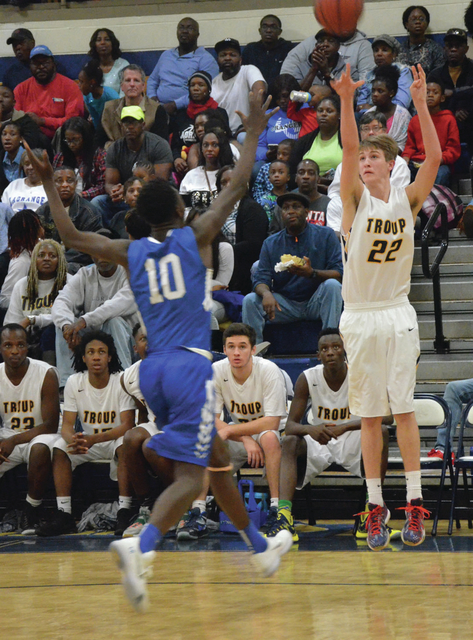 Troup’s Isaac Moss goes up for a shot while LaGrange’s Kenan Gray goes for the block.

http://lagrangenews.com/wp-content/uploads/sites/37/2015/12/web1_LHS43.jpgTroup’s Isaac Moss goes up for a shot while LaGrange’s Kenan Gray goes for the block. Troup’s Grant Whitley gets a shot away.

http://lagrangenews.com/wp-content/uploads/sites/37/2015/12/web1_troup231.jpgTroup’s Grant Whitley gets a shot away.

LAGRANGE – The Troup Tigers were rolling.

After falling behind 14-0 early in the game, the home-standing Tigers found their footing, and they led by as many as two points in the second quarter.

The Grangers regained control of the game late in the second quarter, though, and they never let up.

The Grangers led by seven points at the half, and they dominated the final two quarters to cruise to a 62-44 victory.

The win gave the Grangers a season sweep of their county rivals, and they finished with a combined 4-0 record against Callaway and Troup.

The Grangers have beaten everyone else on their schedule as well, and they’ll carry an 8-0 record into Monday’s showdown against South Atlanta at Woodward Academy.

LaGrange head coach Mark Veal felt his team’s ability to get the pace up was one of the keys to victory.

“We sped them up a little bit, created some fastbreak opportunities for us,” Veal said. “That got us some momentum.”

Troup head coach Paul Brewer said his players got away from the game plan a bit.

“We played like a young team tonight that shot the ball way too much,” Brewer said. “They are more experienced, and they shoot the ball better than we to. We got trapped into shooting the ball from downtown. We have to play possession basketball. We do not have the shooters to match shot for shot with a bunch of guys who that’s what they do.”

The Grangers were going for the early knockout.

The Grangers surged to a 14-0 lead less than five minutes into the game, and the Tigers were getting run out of their own gym.

But Troup hung tough, and by the end of the first quarter, LaGrange’s lead was 18-12.

Dexter Shealey made a 3-pointer moments into the second period, and Jefferson scored 15 seconds later to cap a 16-2 run and give Troup a 19-18 lead.

It went back-and-forth over the next few minutes, and when Russell made a 3-pointer midway through the second period, the Tigers were ahead by two.

Perry answered with a 3-pointer on the other end to put the Grangers back up by one, and they closed the half on a 9-0 run to take a seven-point lead.

“They did a good job of breaking our press, and they came down and hit a few threes and made a run,” Veal said. “We were able to go up seven at halftime and get a little bit of separation.”

The Tigers hung around for a while in the second half, and when Jefferson made a 3-pointer with 4:15 left in the third quarter, the Grangers’ lead was five.

It was all LaGrange after that.

The Grangers closed the third quarter on a 9-0 run, and Smith and Gray capped that run with back-to-back dunks, and the Tigers were in a 49-33 hole as the final period began.

Any hope the Tigers had of staging a comeback ended during a six-second stretch when Jarious Freeman made a 3-pointer and Alex Dantzler scored to push the Grangers’ lead to 55-35 with six minutes to play.

LaGrange led by at least 18 points the rest of the way.