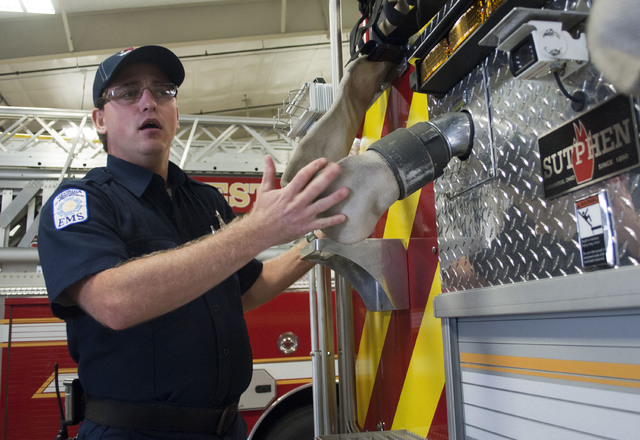 Tim Sanders, right, clasps hands with West Point Fire Chief Mitt Smith on Thursday at the department’s station on Safety Way. Sanders, who was born premature and has handicaps, is a 10-year volunteer with the department and its honorary training officer.

http://lagrangenews.com/wp-content/uploads/sites/37/2015/12/web1_Volunteer01WEB.jpgTim Sanders, right, clasps hands with West Point Fire Chief Mitt Smith on Thursday at the department’s station on Safety Way. Sanders, who was born premature and has handicaps, is a 10-year volunteer with the department and its honorary training officer. WEST POINT — There isn’t much Tim Sanders doesn’t know — or isn’t willing to learn — about the West Point Fire Department.

As its honorary training officer, Sanders, 27, can explain in detail almost every piece of equipment at the department’s disposal.

He knows about the different types of saws and whether they’re for cutting concrete, wood or metal. He can explain the varying gauges of hose tucked away in roll-up compartments of the fire trucks. He can tell you how long a firefighter has until his or her oxygen tank runs out — it’s between 15 and 30 minutes, depending on how heavily the firefighter is breathing, if you’re curious.

With 10 years of volunteering at the department under his belt, Sanders has learned just about everything there is to know about the department’s gear and its day-to-day operations — all despite a major setback.

Sanders was born 14 weeks premature, and because of that has some mental and physical challenges. His mother, Sue Mahoney of Huguley, Alabama, said her son was born without part of his brain and a neurologist told her he’d never survive.

“But he sure showed that doctor,” she said.

West Point Fire Chief Mitt Smith first met Sanders through the Boy Scouts of America and after getting to know him, invited him to spend some time at the fire department. That was a decade ago, and Sanders has been around ever since.

“It’s part of a community outreach to get people involved and let them know about the fire service, or simply let people know we’ve got a softer side,” Smith said.

“Tim’s like a sponge, he listens,” Smith said. “He can spit back out everything he’s listening to and everything he’s hearing. If you say something incorrect, he’s going to call you out on it.”

It’s not every day that Sanders is at the fire station on Safety Way just down from the Kia plant, but when he’s in town, the whole West Point city staff knows it, Smith said.

“He loves to be involved in checking the trucks,” Smith said. “He helps clean the station and part of the truck checks, of course, is doing the radio checks. I think everybody in the city system — like 911, police, fire — when they hear him they’re excited that Tim’s in town and they know sooner or later, he’ll get to come by and see them.”

At the station on Thursday, Sanders walked with a proud bounce in his step and a firefighter’s badge affixed to his uniform as he inspected the trucks and gear. But checking the trucks is just one of the many things Sanders does when he’s at the station.

“What I enjoy most doing when I come up here is to help the guys out if they need it,” Sanders said. “If we have to get the facility ready for a Christmas party, they’ll have me buff the apparatus bay and clean the oil spills up from the trucks. I help wash the trucks and water the sod, too.”

As the honorary training officer, Sanders likes to be one of the first people new firefighters meet.

“I come up here to train new guys before they come on board,” he said. “I give them firsthand training and then I send them to school. I teach them how to work the fire hose, how to run a chainsaw properly.”

When Sanders isn’t at the fire station, he works as a maintenance worker at Southern Harbor Marina and Resort in Lanett, Alabama. He’s also an Eagle Scout and graduated from Harris County High School in 2008.

Although Sanders is always willing to lend a hand and help out with the chores that need to be done, it’s his attitude that motivates his fellow firefighters as much as anything, said Firefighter Brandon Ashford, who’s been with West Point fire for two years.

“We like having him around because we know Tim’s passion for this place,” Ashford said. “Tim has a lot of energy. Every time I’ve ever seen Tim come here, he’s always got this vibe of positive energy.”

“Tim can motivate anyone to have that upbeat, chipper attitude,” he said. “I’ve made this statement before: we’ve got people who are drawing a good salary to be here. They may have a day that they don’t want to be here. Tim’s coming in as a volunteer and his only guarantee is to put a smile on your face and maybe eat lunch. Tim can be a motivator in that sense.”

After having Tim on board at the fire station for so long, Smith said he couldn’t imagine it any other way.

“Why do we do this for Tim?” he said. “I don’t really have an explanation for why or how it’s happened, except that it’s the right thing to do.

“Tim’s a really good guy, he’s a great friend,” Smith added. “Especially in the fire service, it’s a brotherhood and Tim is a brother.”