Callaway gets another rivalry win 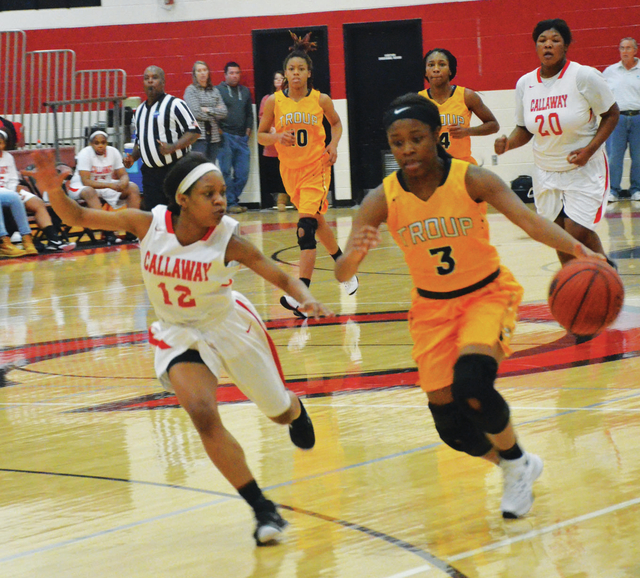 HOGANSVILLE – Chalk up another rivalry win for the Callaway Lady Cavaliers.

After beating LaGrange 47-42 last week, Callaway was at home on Saturday to take on the Troup Lady Tigers.

It was a close, hard-fought game, and Callaway made the plays at the end to walk away with a 47-44 victory.

The Lady Cavaliers were down by seven points at the close of the third period, but they outscored the Lady Tigers 17-7 in the final quarter to get the win.

“I thought we played our style of basketball,” said Callaway head coach Deyano Martin, whose team bounced back from a loss to Harris County on Friday. “And I thought we made free throws. Free throws hurt us (against Harris). I thought they helped us tonight.”

Troup was looking to make it two in a row against county foes after outlasting LaGrange 61-56 on Friday, but it didn’t happen.

“They gave me what they had,” Troup coach Carla Thornton said. “We’ll go back to work from here.”

Guard Ki Ki Owens and post player Chyna Cameron each had 12 points for Callaway, Alexus Scott added 10 points, and Zamari Hardnett scored nine points and was 5-of-6 from the free-throw line.

For Troup, Kwyneshia Spence led the way with 16 points, and Shaqoya Gilbert scored 11 points and made 5-of-6 of her free-throw attempts.

Scott scored six points in the first quarter to help the Lady Cavaliers build a 15-8 lead.

Troup rallied in the second period, and Callaway’s lead was down to 23-21 by the half.

It was tied 30-30 in the third quarter when Troup went on a 9-0 to build a seemingly commanding 39-30 lead early in the fourth quarter.

Spence scored five points in the final eight seconds of the third period.

Spence scored with eight seconds left in the quarter to give Troup a 34-30 lead, and she then banked in a 3-pointer at the buzzer to give her team a seven-point lead heading into the final period.

When Gilbert scored early in the fourth quarter, Troup’s lead was up to nine.

Owens jump-started the comeback by completing a three-point play with 7:17 left in the game, and that was the beginning of a 13-0 run that spanned about four minutes.

Cameron capped the run when she pulled down a rebound and scored with 3:42 remaining, and Callaway led 43-39.

Kiya Fulton scored with 1:28 left to get the Lady Tigers within a point.

After Hardnett made two free throws with 40 seconds left to put Callaway back up by three, Gilbert answered with two free throws of her own to make it a one-point game with 32 seconds remaining.

After a Callaway miss, Troup got the rebound with a chance to take the lead with a bucket.

The Lady Tigers got three good looks at the basket, but none of those shots would fall, and the Lady Cavaliers got the rebound after the third miss.

Hardnett was fouled, and she made both of her free-throw attempts, and Callaway led by three with four seconds to play.

Troup got a potential game-tying 3-point shot away at the buzzer, but it didn’t find the mark, and Callaway had the close win.

Martin was able to get his key players some rest throughout the game, and he felt that helped his team stay fresh in the fourth quarter.

“It is imperative that we rest,” Martin said. “We’ve got to find time to rest some of the vets. And we did that. We were able to finish the game pretty strong.”