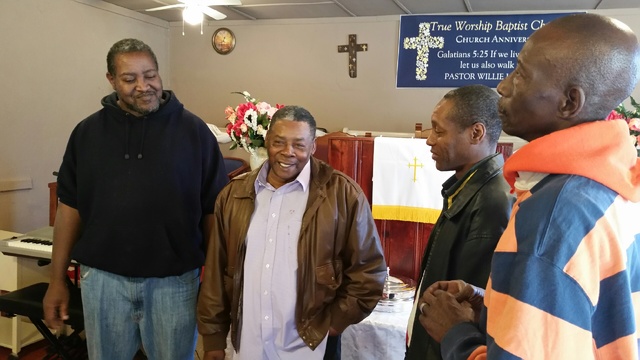 Members of true Worship Baptist Church gather during the third annual ‘Three W’s of Christmas’ celebration on Sunday for children in the neighborhoods around the church at 609 Whitesville St. In addition to giving away candy, fruit and gifts, congregation members also teach them about the ‘who, what and why’ of the Christmas holiday. The Rev. Willie Hutchinson, church pastor, also gives away two bicycles for one lucky girl and boy.

http://lagrangenews.com/wp-content/uploads/sites/37/2015/12/web1_20151220_162411_resized.jpgMembers of true Worship Baptist Church gather during the third annual ‘Three W’s of Christmas’ celebration on Sunday for children in the neighborhoods around the church at 609 Whitesville St. In addition to giving away candy, fruit and gifts, congregation members also teach them about the ‘who, what and why’ of the Christmas holiday. The Rev. Willie Hutchinson, church pastor, also gives away two bicycles for one lucky girl and boy. The Rev. Willie Hutchinson stands at the pulpit of the True Worship Baptist Church. The Rev. Willie Hutchinson, second from left, stands with congregation members as they plan out the third annual ‘Three W’s of Christmas’ celebration.

http://lagrangenews.com/wp-content/uploads/sites/37/2015/12/web1_20151219_152821.jpegThe Rev. Willie Hutchinson, second from left, stands with congregation members as they plan out the third annual ‘Three W’s of Christmas’ celebration.

LaGRANGE — When Army Pvt. Willie Hutchinson was severely wounded fighting off the Viet Cong in the 1960s while trying to save some of his soldiers, he had no idea his selfless act would make a difference decades later in the community he grew up in.

Hutchinson said he was a squad leader on a search and destroy mission in Vietnam when the enemy surrounded his troops while resting in foxholes overnight. Though pinned down and taking on heavy gunfire, Hutchinson managed to reach two soldiers in his platoon calling for help.

The squad leader said he shot off several rounds at the enemy before being shot in the leg.

Before being honorably discharged from the Army, Hutchinson received the National Defense Service Medal, Vietnam Service Medal, Army Commendation Medal with Valor and the Purple Heart.

But most importantly, Hutchinson said, he knew he wanted to continue helping others in need.

After returning to LaGrange, Hutchinson became an ordained minister.

He had served his country, now it was time to serve his community.

“God definitely had a plan for me,” he said. “The day I got shot I was a full combat veteran. I was wounded in what was to be my last month in country. Sure I have a bad leg, but God brought me through it … it took time, but God had a plan.”

One of those plans celebrated its third anniversary on Sunday. At least 75 children from the neighborhoods surrounding the True Worship Baptist Church at 609 Whitesville St. felt safe and loved inside the four walls the now-pastor Hutchinson’s house of worship.

The children were part of the congregation’s third annual ‘Three W’s of Christmas’ celebration where, in addition to be showered with lots of love, gifts, candy and attention by church members, the youths also learn about the true meaning of the season.

“It’s the who, the what and the why of Christmas,” Hutchinson explained. “We teach them about Christ, about love and about a better way of life. We tell them there is someone here to talk to them … I’ve been there. I’ve been poor.

“These kids just want a little love and we want to let them know that someone loves them,” he added.

“I love to see the children smile because it makes me feel happy,” said Dexter Strozier, church member. “Just to show them that we love them and that our door is always open for them.”

Hutchinson said for the second year in a row, one girl and boy were also a given a brand new bicycle.

“It’s good for the community,” said Maxie Johnson, church member. “For some in our community, this is a sad time of year. But I thank God for our pastors who are going to show them that God loves them … and it’s (the season) not about yourself, it’s about God and helping others.”

The pastor said giving away the bicycle was something Charlie Soloman, owner of Soloman’s Department store on Bull Street, used to do for him every year while he worked in the shop as a youth.

Hutchinson said it is his way of showing the children a true selfless act of love, without asking anything in return.

It was also his way of “paying it forward,” like Charlie Soloman.

But the bicycles were not the only items paid out of Hutchinson’s pocket — so were the all the candy, fruit and gifts from the ‘Three W’s of Christmas,’ plus any other community needs.

According to Hutchinson, the True Worship Baptist Church does not receive any donations, everything comes from himself, the congregation, the help of family and, of course, the man upstairs.

“God moves in mysterious ways,” he said. “We’ve been leaning and depending on him. Where there is a will, there is a way.”

Hutchinson is praying God will once again make a way for a new fellowship hall to be built on to the church. The pastor said the facility will be used as a clothing closet, counseling center and food ministry to help those less fortunate in the surrounding community.

“When God called me to preach, he called me to help people,” Hutchinson stated. “I just want to help someone like Charlie Soloman helped me … buy me a bike out of the goodness of his heart.

But Hutchinson has stood in the face of adversity before and believes somehow, funding will come through for the fellowship hall.

The pastor said if God used him to help others in need in the jungles of Vietnam, surely the mission will continue on a grander scale in the streets of LaGrange.