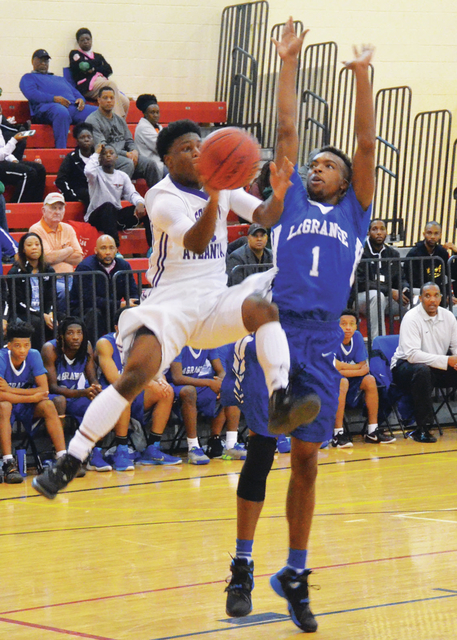 COLLEGE PARK – For the first time this season, the LaGrange Grangers will have to bounce back from a loss.

Including their preseason victory over the Central-Carroll Lions, the Grangers had taken the floor nine times this season, and they’d emerged victorious on each occasion.

That was before Monday’s game.

The Grangers had a one-point lead late in the third period, but they were down 42-38 by the time the quarter ended, and they were outscored 22-12 during the final eight minutes.

LaGrange will look to begin a new winning streak when it faces Dutchtown today at 2:30 p.m. at Woodward Academy.

“We didn’t play as good as I hoped we would,” LaGrange head coach Mark Veal said. “The good news is, the season’s not done, and we get to bounce back tomorrow.”

With 14 points, LaPerion Perry was the only LaGrange player to reach double figures, and 12 of his points came in the first half.

South Atlanta had three players in double figures, including Devonta Pullins, who scored 15 points and had three of his team’s six 3-pointers.

The Grangers trailed 9-0 early in the game, but they fought back to get within four at the half, and they took a 38-37 lead with less than a minute left in the third period.

South Atlanta responded with a 9-0 run to take an eight-point lead early in the fourth quarter, and LaGrange came no closer than five the rest of the way.

LaGrange struggled to find the basket in the early going.

More than three minutes had gone by before Perry scored to give the Grangers their first points of the game after the Hornets scored the first nine points.

“They started out early with some different defensive pressures, and we had a hard time adjusting,” Veal said. “We also missed some easy baskets early that would have given us some momentum.”

Perry ended up scoring all of the Grangers’ points in the first quarter as the Hornets surged to a 16-5 lead.

The deficit was 14 in the second period when the Grangers started to find their offensive footing.

After the Hornets went back up by 10, Duckett and Perry hit 3-pointers to help the Grangers cut their deficit to 28-24 at the half.

The Grangers took their first lead of the game when Duckett made a 3-pointer to put his team on top 32-31 with 3:50 left in the third quarter.

The teams swapped leads a few times after that, and when Fanning made two free throws with 48 seconds left in the third quarter, LaGrange was ahead 38-37.

South Atlanta answered with a 5-0 run that was capped by a Pullins 3-pointer at the buzzer, and LaGrange trailed 42-38 as the final quarter began.

After falling behind by eight, the Grangers got within five when Smith drained a 3-pointer with 6:23 to play, but Orlando Beebe answered with a 3-pointer on the other end to push the lead back to eight.

LaGrange trailed by at least eight points the rest of the way.