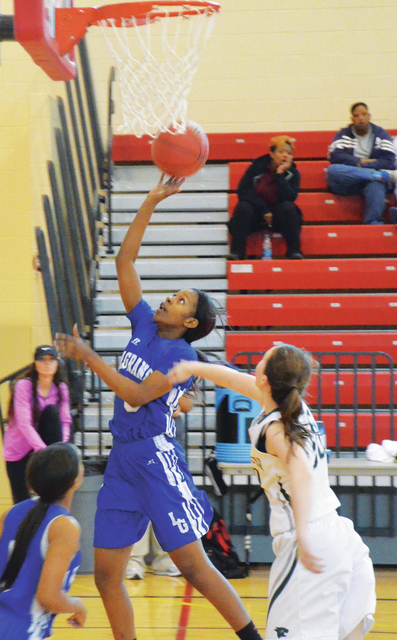 With 20 points, Aryan Dozier scored nearly half of the points for LaGrange during Monday’s game. Kevin Eckleberry | Daily News

COLLEGE PARK – It was all about finishing.

The LaGrange Lady Grangers (5-4) had plenty of good looks at the basket during Monday’s basketball game against Westminster, but they had a hard getting those shots to fall.

Trailing by 15 points at the half, the Lady Grangers were unable to get any closer than 12 points in the second half, and they ended up losing 60-43 in the War Eagle Classic at Woodward Academy.

“I felt like we didn’t finish well in the paint,” LaGrange head coach Jan Fendley said. “We had a ton of good looks, and if we can finish those in the paint, then we’re right there.”

Sophomore guard Aryan Dozier had 20 points for LaGrange, and no one on else on the team had more than six points.

It was a slow start for the Lady Grangers, who were down 19-6 at the close of the first period.

When Carmen McGhee scored after pulling down an offensive rebound with 1:30 left in the half, Westminster’s lead was 30-20.

LaGrange was unable to keep that momentum going, though, and Westminster closed the first half on a 5-0 run to take a 35-20 lead.

The Lady Grangers continued to hang around in the third period.

They got as close as 12 points when Dozier made a 3-pointer with 3:03 left in the third quarter, but by the time the period came to a close, Westminster’s lead was 47-31.

Dozier hit a jumper moments into the fourth quarter to cut the deficit to 14, but LaGrange couldn’t get any closer.

Blair Herrod had a couple of late baskets to get LaGrange within 14 points, but on both occasions Westminster answered and extended its lead.

Eleven LaGrange players spent some time on the floor, and Fendley said that was the plan.

“We were able to rotate a lot of kids off the bench, and that was our goal coming in,” Fendley said. “We’ve got to be able to give some front-runners to rest, and be able to rely and trust the ones coming off the bench. We’re going to need them in region play.”

LaGrange will be back at Woodward Academy today at 1 p.m. for a game against Grady.

After that, LaGrange won’t play again until Jan. 5 when it begins Region 1-AAAAA play against Hardaway.

“We’ve got a lot of playing time in, and then we’ll give them a break before we start back in January, which will be the games that matter,” Fendley said.