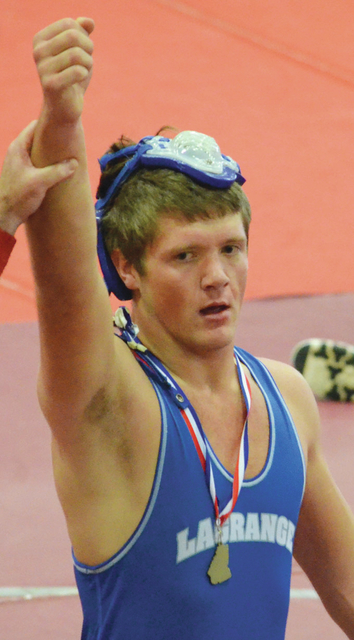 LaGrange’s Kamren Stargill grapples with his opponent from Upson-Lee during a match on Tuesday. Kevin Eckleberry | Daily News

http://lagrangenews.com/wp-content/uploads/sites/37/2015/12/web1_LHS-stargill.jpgLaGrange’s Kamren Stargill grapples with his opponent from Upson-Lee during a match on Tuesday. Kevin Eckleberry | Daily News LaGrange’s Guy Wegienka followed up his win in the CRWA tournament by finishing first in the Hardaway Invitational. Kevin Eckleberry | Daily News

http://lagrangenews.com/wp-content/uploads/sites/37/2015/12/web1_wegienka.jpgLaGrange’s Guy Wegienka followed up his win in the CRWA tournament by finishing first in the Hardaway Invitational. Kevin Eckleberry | Daily News

LAGRANGE – They were short-handed, but the LaGrange Grangers still stood tall.

Competing in the Hardaway Invitational last weekend, the LaGrange wrestling team finished fifth out of 20 teams, with senior Guy Wegienka leading the way with his second tournament win in a row.

LaGrange returned to the mat on Tuesday for the start of the two-day Dariel Daniel Grind that’s being held at Troup High.

LaGrange wrestled five times and went 2-3, and it will have four more matches today.

In the Hardaway tournament, Wegienka followed up his win in the Chattahoochee River Wrestling Association tournament by capturing another first-place medal.

Wegienka won all but one of his matches by pin, and he was also given the Scholar Athlete Award.

Other standout wrestlers for LaGrange included Matt Watford, who finished second, and John Todd Bohn, who had a third-place finish.

Jordan Ragan finished fourth, and Colt Creed was one match away from placing after earning a fifth-place finish at the CRWA tournament.

Quindon Dunson was also one victory away from placing, and while Dijon Hart had a tough weekend, it’s been a strong season for him.

Wegienka dominated the 195-pound division, and he pinned Austin Phillips of Smiths Station in the finals.

“Guy had an oustanding tournament and wrestled extremely talented wrestlers and ended up having first-period pins in every match but one,” LaGrange head coach Scooter Weathers said.

Watford made it to the finals at 145 pounds before losing to Jonboy Storey of Central-Phenix City in overtime.

“Matt continued to wrestle well by placing in a very tough 16-man bracket,” Weathers said. “He was really battle-tested in this tournament.”

Watford was pleased with his performance, but he said there’s still plenty of work to do.

“I’ll just keep grinding, and keep working hard at practice, and just become a better wrestler all around,” Watford said after getting a win over an Upson-Lee wrestler on Tuesday.

Bohn finished third in what Weathers called “probably the second-toughest bracket of the tournament. He had a great tournament and is getting better each time he steps in the circle.

Ragan delivered a fourth-place showing at 220 pounds, and Weathers said “he was out-matched in weight but proved he was ready for the challenge. Jordan’s weight plan will not let him get to where he is going to wrestle so he wrestled at 184 pounds in the 220-pound weight class and held his own.”

Weathers added that Ragan “was like David vs. Goliath and he upset several tough seeded wrestlers.”

Creed didn’t place at 113 pouinds, but Weathers said he had a strong tournament.

“Colt had a great tournament,” Weathers said. “He was the eighth seed in a tough weight class and defeated the number two seed from Central-Phenix City 21-4. He wrestled really well and has a lot of grit and determination and is really getting better.”

Creed earned a medal at the CRWA tournament when he finished fifth.

In the 132-pound division at the Hardaway tournament, Weathers said Dunson “was one match from placing and is improving each day. He is a raw wrestler who has a ton of heart and his conditioning is unreal. He is like the Energizer bunny who just keeps coming and coming after you.”

Hart wrestled at 182 pounds at the Hardaway tournament, and Weathers said he “hit a little skid this weekend but knowing how hard he works he will rebound nicely. He has been a solid fixture in our lineup this year posting a 22-6 record.”

Despite only have half the weight classes filled, LaGrange still managed a top-five finish.

“To finish top five at the Hardaway Invitational is really great,” Weathers said. “This was a salty bunch of LaGrange wrestlers. They didn’t look at it as we only have half a team, they looked at it as a great challenge. I encouraged them to believe we can be top five with only seven wrestlers and they stepped up to the challenge.”

Watford said a key for the team is to get every wrestler at the weight class where he fits best.

“I think we’ll be able to make it to the state duals,” Watford said. “First we’ve just got to get our weights right. That’s our first competition, the weight, the scale.”