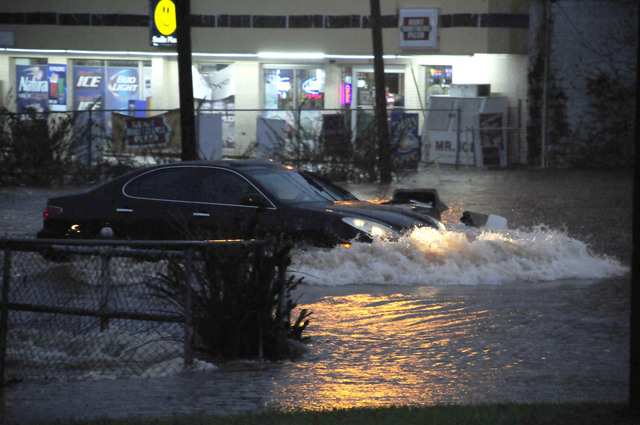 Water pools in the lobby of the Carmike Cinemas LaGrange 10 movie theater this morning after heavy rains breached the ceiling.

http://lagrangenews.com/wp-content/uploads/sites/37/2015/12/web1_WEBTheaterRoof012.jpgWater pools in the lobby of the Carmike Cinemas LaGrange 10 movie theater this morning after heavy rains breached the ceiling. LaGRANGE — Firefighters with the LaGrange Fire Department took no chances and closed down the Carmike LaGrange 10 movie theater at 201 Main St. after a cleaning crew today found the lobby full of water just before 8:30 a.m.

LaGrange police officers immediately roped off the area as fire crews inspected the facility from the inside.

Firefighters were looking for the source of the leak and more puddles of water.

LFD Lt. Chris Taylor said from their initial pass through, they believe the majority of the water damage is in the ceiling area over the main lobby of the area.

Taylor estimated there was between 100 and 200 gallons of water on the lobby floor.

He said that much water meant the roof and the ceiling was probably unstable and there could be water inside the electrical system, which made the building extremely unsafe.

LaGrange police ordered everyone out of the theater except emergency personnel.

LFD crews did find water in other parts of the facility, but Taylor did not say where those areas were inside the theater.

The theater is owned by the Downtown Development Authority and is leased to Carmike Cinemas. Bobby Carmichael, the executive director of the DDA, said today’s heavy rainfall may have caused leakage in the building’s roof

“They’re trying to make sure all the other roof is OK,” he said by phone this morning.” It appears what happens is the water stopped up on the roof and caused some drainage to get inside and knock down the ceiling tiles.”

Carmichael estimated it could take a day or two to clean up the mess and the theater would likely remain closed until the cleaning can be completed.

Managers with the Carmike LaGrange 10 were on their way to the building and not available for comment before press time.

Areas all around Troup County reported more than a foot of standing water this morning during a deluge that left more than 5 inches of rain by 8 a.m., according to a downtown rain gauge.

Areas including South Greenwood at Ashton streets, Forrest Avenue at Vernon Street, Kelley Street, South Davis Road at New Community Church, Murphy and Juniper streets, and downtown West Point were among those reported flooded this morning. As of press time, reports of West Point Road at Long Cane Road and the 200 block of Alton Drive washing out were called in to 911 and at least one home was reported to possibly be off the its foundation from the flooding.