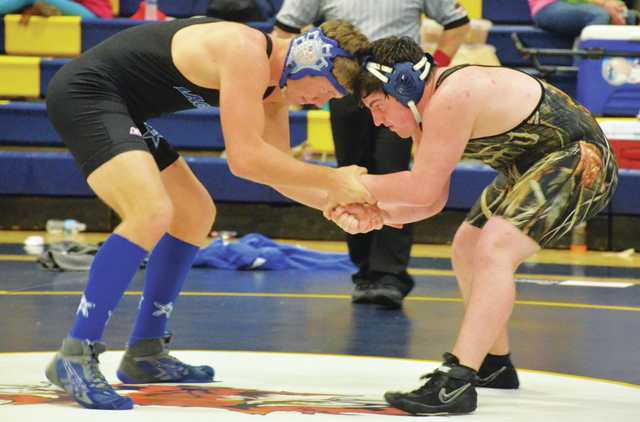 LAGRANGE – The short-handed LaGrange High wrestling team wrapped up its stay in the Dariel Daniel Grind on Wednesday at Troup High.

A number of wrestlers who would normally be a part of the lineup were unable to go for various reasons, and the Grangers won just one of their four dual matches on the final day of the two-day tournament.

The Grangers wrestled a total of nine matches during the two days, and they finished with a 3-6 record.

“We had three guys sick. So that was tough,” said LaGrange assistant coach Clark Rich. “We were wrestling B-teamers all day.”

In addition to the wrestlers who were sick, some other Grangers are also injured.

It was still a productive two days for the Grangers, with the wrestlers who were able to go getting a whole bunch of mat time.

One of the men who was able to go on Wednesday was Guy Wegienka, who didn’t wrestle on Tuesday.

In Wednesday’s final match against Troup, Wegienka had one of LaGrange’s two wins.

Wegienka, who is coming off back-to-back championships in the Chattahoochee River Wrestling Association tournament and the Hardaway Invitational, won by pin at 195 pounds.

Luke Haynes also got a win for LaGrange with a pin at 120 pounds.

“He caught the kid in the end and pinned him, so that was a big plus for us,” Rich said of Haynes.

Rich said all of the wrestlers who were able to go used the two days as a way to improve their skill set.

“You try to improve your technique,” Rich said. “We hit some good moves. We did some good things.”

The Grangers will take the next three days off before returning to practice on Sunday.

LaGrange returns to competition on Tuesday when it hosts the two-day Gary Silva Invitational at Gardner Newman Middle School.

It will be a traditional-format tournament, and LaGrange will be looking to build on its strong performance from the Hardaway Invitational when it finished fifth and had a number of placers.

After that, LaGrange will be at Starr’s Mill on Jan. 8 for the Area 1-AAAAA dual tournament.