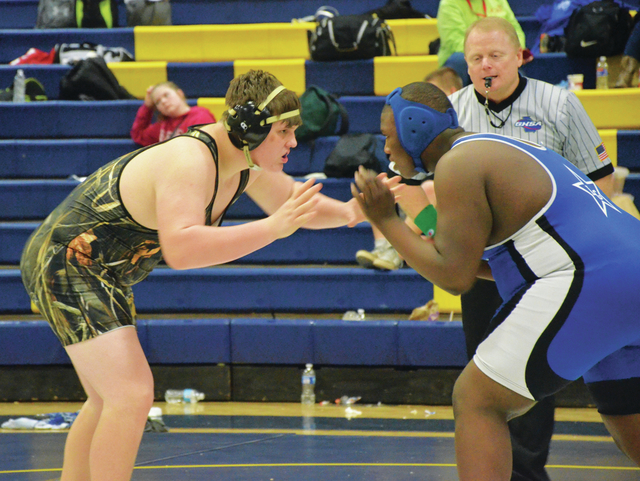 Troup’s Trevor Upchurch gets ready to wrestle LaGrange’s Colt Creed during a match in the Dariel Daniel Grind on Wednesday. Upchurch won the match, and he helped Troup post a 6-3 record during the tournament. Kevin Eckleberry | Daily News

http://lagrangenews.com/wp-content/uploads/sites/37/2015/12/web1_troup-upchurch.jpgTroup’s Trevor Upchurch gets ready to wrestle LaGrange’s Colt Creed during a match in the Dariel Daniel Grind on Wednesday. Upchurch won the match, and he helped Troup post a 6-3 record during the tournament. Kevin Eckleberry | Daily News Troup’s Chase Seals and LaGrange’s Quindon Dunson face off in the 132-pound weight class at the Dariel Daniel Grind. Seals went 9-0 over the course of the two days with seven pins. Kevin Eckleberry | Daily News

http://lagrangenews.com/wp-content/uploads/sites/37/2015/12/web1_troup-seals2.jpgTroup’s Chase Seals and LaGrange’s Quindon Dunson face off in the 132-pound weight class at the Dariel Daniel Grind. Seals went 9-0 over the course of the two days with seven pins. Kevin Eckleberry | Daily News LAGRANGE – Craig Garner figured it was a fitting way to honor a legendary coach.

Sadly, Daniel was killed in a car accident two years ago, but while he is gone, he certainly isn’t forgotten.

Garner, who wrestled for Daniel and won an individual state title under his tutelage, is in his second season as Troup’s head coach.

When Garner was putting together the schedule for the 2015-2016 season, he wanted the school to host a tournament named after his former coach.

He didn’t want it to just be another run-of-the-mill tournament.

He wanted to put the wrestlers to the test, to push them to the limit, so he created a tournament called the Dariel Daniel Grind.

It’s a two-day, dual-format tournament where each of the participating teams wrestle a whopping nine matches in two days.

“I remember back in the day going to Baldwin,” Garner said, recalling his days as a wrestler for Daniel. “It was a one-day, five-match dual tournament, which back then was uncommon. We didn’t every do that. And I remember him commenting how much he liked that, and how tough it was and how much of a grind it was.”

So the Dariel Daniel Grind was created.

Garner toyed with the idea of making it a three-day tournament where each team would wrestle 15 times, but he settled on a two-day event.

“The harder the better,” Garner said. “That’s what you do. It’s a tough sport.”

The tournament wrapped up on Wednesday, with Garner’s Tigers finishing with a 6-3 record.

Troup wrestled five times on Tuesday and won three of those matches before finishing things off with a 3-1 record on Wednesday.

Troup’s only loss on Wednesday was a close one to Carrollton.

It came down to the final match, and Carrollton won by two points.

Troup followed up the loss to Carrollton by beating LaGrange 60-24, putting the wraps on a busy and physically demanding two days.

Beyond naming a tournament after Daniel, Garner said “what we’re trying to do is carry on his namesake, and build back up the tradition, and the legacy that he’s built here. You look up there (on the gymnasium wall), and you see all the state championships.”

Troup’s top wrestler during the Dariel Daniel Grind was Chase Seals, who went 9-0 with seven pins.

In his final match of the day against LaGrange, Seals won by pin in the first round.

Seals, who had a third-place finish at last weekend’s tournament at Whitewater High School, was happy to be able to get a bunch of pins during the two days.

“I’m most proud of the pins, really,” Seals said. “I normally don’t pin a lot of people. These last two days, I pinned seven guys.”

In the LaGrange match, Jeremiah McClendon, Trevor Upchurch, Trey Harris, Colby Harry and Marcdrevious Flagg each won by pin, and Troup also won a handful of matches via forfeit.

Troup will return to the mat on Dec. 29 for the start of the two-day Fayette County Christmas Classic.

Troup will then participate in an event at Ola High School on Jan. 2 before competing in the area duals on Jan. 8 at Woodward Academy.

One of the teams Troup will likely need to beat to win the area championship is Carrollton, which it lost a close one to on Wednesday.

Troup is without some key wrestlers at the moment, including heavyweight Hudson Newton who was a state placer last year, and Seals believes when the team is at full strength it will be tough to beat.

“I’m ready to get a couple of guys back that we’re missing,” Seals said. “We’re going to pull through and beat Carrollton. I feel like we should.”