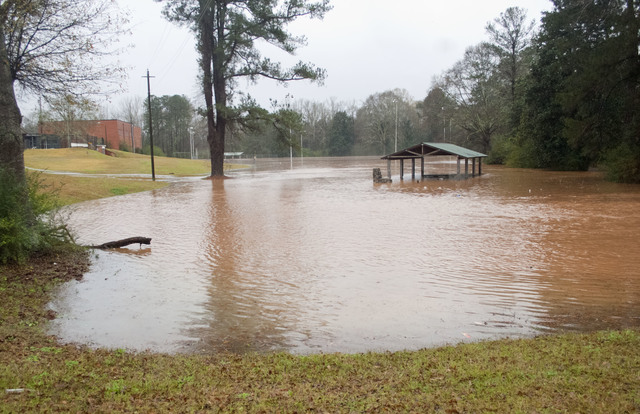 Rain floods a field behind the William J. Griggs Recreation Center off Glenn Robertson Drive on Thursday. Forecasters say the weather phenomenon El Niño is to blame for a wetter than normal winter.

http://lagrangenews.com/wp-content/uploads/sites/37/2015/12/web1_RainRoundup02WEB1.jpgRain floods a field behind the William J. Griggs Recreation Center off Glenn Robertson Drive on Thursday. Forecasters say the weather phenomenon El Niño is to blame for a wetter than normal winter.

LaGRANGE — Warmer than usual ocean temperatures in the equatorial Pacific may be to blame for record-setting rainfall in Georgia, experts said Monday.

El Niño, a periodic weather phenomenon, happens when warmer ocean temperatures cause more moisture to evaporate from the ocean’s surface and be carried eastward to the United States, according to Shea Rose, an associate professor of geosciences at the University of West Georgia in Carrollton.

“Just speaking about El Niño, it sets us up for weather like thunderstorms and tornadoes,” she said. “If the right weather pattern or system comes along, it can release a lot of energy.”

Rose said the pairing of El Niño with a strong rotation of Arctic air to the north is trapping warm air in the Deep South and pushing rainfall toward the region.

“Right now we’ve had strong positive Arctic oscillation at the North Pole, and that strong circulation has been holding the cold air to the north, but it looks like that’s about to change,” she said.

Adam Baker, a meteorologist with the National Weather Service in Peachtree City, said a warm band of air that circulates through Georgia acts as a path for moisture picked up by El Niño to make its way to the region.

“The biggest effect in Georgia is the subtropical jet,” he said. “All of that ocean heat energy helps drive a pipeline of moisture across the Southeast. Not only is it bringing us a lot of moisture, but it can react with different disturbances and bring us more active storm patterns.”

This year’s El Niño — like the rainfall it’s brought — is expected to set records, Baker said.

“This was forecasted to be a record-breaking El Niño. The previous strongest was in 1997 and 1998,” he said. “This one is already rivaling that one and forecasted to be stronger. We actually started seeing the effects of this as early as last fall, causing abnormally high rain falls.”

Forecasters said Georgia will find a brief reprieve from the rain today, but more showers are expected to roll in Wednesday.

“The system that’s knocking on our door could add another one or two inches (of rain) in northwest Georgia,” Baker said.

The current El Niño began in about March and the pattern generally lasts a few months to a year, said Carly Kovacik, a meteorologist with the National Weather Service in Peachtree City. Georgia residents could feel El Niño’s effects into late spring or early summer, she said.

In the near future, the fast-moving Arctic air to the north is expected to slow down during the first weeks of January, allowing colder air to spill south, Kovacik said. Combined with the El Niño, that could make for a cold and wet winter in Georgia, she said.

El Niño is a normal feature of the climate, said Rose, the university professor.

“El Niño has been going on since before we were recording data,” she said. “It’s a feature of the climate that has been around for a while, but we don’t know exactly why it occurs. It’s just a naturally occurring feature in our climate.”

The phenomenon was first noticed by Peruvian fisherman, according to the National Oceanic and Atmospheric Administration. Because the fisherman typically noticed the effects around Christmas time, they called it “El Niño,” which means “little boy,” a reference to the Christ child because of its tendency to arrive around Christmas.

“So it’s kind of fitting that we’re seeing it around Christmas,” Rose said.