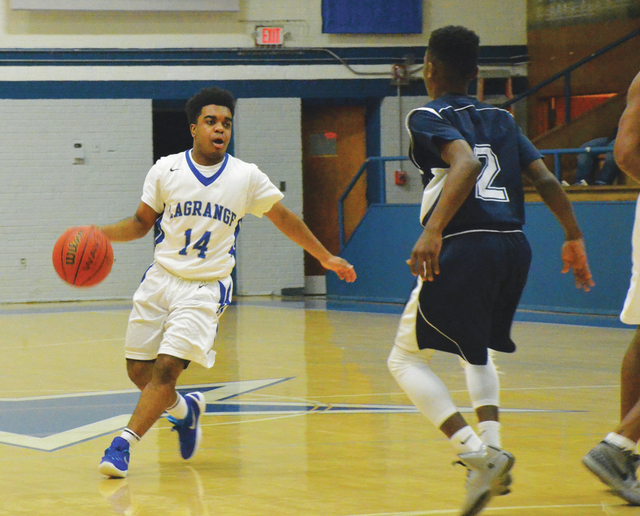 LaGrange’s Kenan Gray has one of his three second-quarter dunks during Monday’s 73-46 victory over WD Mohammed in the opening round of the LaGrange Toyota Basketball Classic. Kevin Eckleberry | Daily News

http://lagrangenews.com/wp-content/uploads/sites/37/2015/12/web1_LHS26.jpgLaGrange’s Kenan Gray has one of his three second-quarter dunks during Monday’s 73-46 victory over WD Mohammed in the opening round of the LaGrange Toyota Basketball Classic. Kevin Eckleberry | Daily News Alex Dantzler gets LaGrange on the board with a 3-pointer at the start of Monday’s game. Dantzler led LaGrange with 16 points. Kevin Eckleberry | Daily News

http://lagrangenews.com/wp-content/uploads/sites/37/2015/12/web1_LHS7.jpgAlex Dantzler gets LaGrange on the board with a 3-pointer at the start of Monday’s game. Dantzler led LaGrange with 16 points. Kevin Eckleberry | Daily News LAGRANGE – They put on a show.

Alex Dantzler, who made four 3-pointers, led the way with 16 points, and 11 of those points came in the decisive first half as the Grangers stormed to a 55-19 lead.

Jerious Freeman made three 3-pointers in the first half and finished with nine points, and Kenan Gray had eight points, and six of those points came on dunks in the second quarter.

LaGrange head coach Mark Veal said a lot of the offensive production was a product of a tremendous defensive effort.

Dantzler, a senior guard, hit a 3-pointer moments into the game, and the Grangers were off and running.

“That gave us some momentum, and we just kept scoring after that,” Dantzler said.

The Grangers led 23-5 after the first quarter, and they were up by 36 points by the time the halftime break rolled around.

In the second half, Veal called off the pressure and emptied the bench, and WD Mohammed was able to make the final score more respectable.

LaGrange showed off its offensive versatility in the first half.

The Grangers did it from the outside with seven 3-pointers in the first two quarters, but they also showed off their ability to get to the rim.

In the final five minutes of the second quarter, the Grangers had five dunks, including three from Gray.

Duckett had an impressive follow-up dunk after a missed shot, and Bo Russell capped the first-half scoring with a dunk.

Smith, the 5-foot-10 senior guard, had a dunk in the first quarter.

The Grangers built their big early lead with their ability to make shots from long distance.

Dantzler had two 3-pointers to help the Grangers soar to an 18-0 lead less than five minutes into the game, and Freeman made one from long range late in the first quarter to give his team a 23-5 lead.

WD Mohammed showed some life at the start of the second quarter, scoring five straight points to cut LaGrange’s lead to 13.

Any hope WD Mohammed had of getting back into the game was about to get squashed, though.

Mike Hardy, Duckett, Freeman and Dantzler connected on consecutive 3-pointers to give the Grangers a 35-10 lead.

After a dunk by Gray, Duckett and Freeman had back-to-back 3-pointers, and LaGrange led 43-15.

Later in the half, Gray had two more dunks, and Duckett had one of his own after a missed shot, and the Grangers had a 55-19 cushion at the break.

LaGrange will continue its pursuit of a championship with a game against Upson-Lee at 7:30 p.m. today.

It will be a matchup of the two tournament teams with the best overall record.

LaGrange, which began the season with eight consecutive wins, is now 10-1, while Upson-Lee improved to 9-3 with Monday’s win over Lithia Springs.

If LaGrange beats Upson-Lee, it would play for the tournament championship on Wednesday at 7:30 p.m.

It’ll be a busy week on the wrestling mat