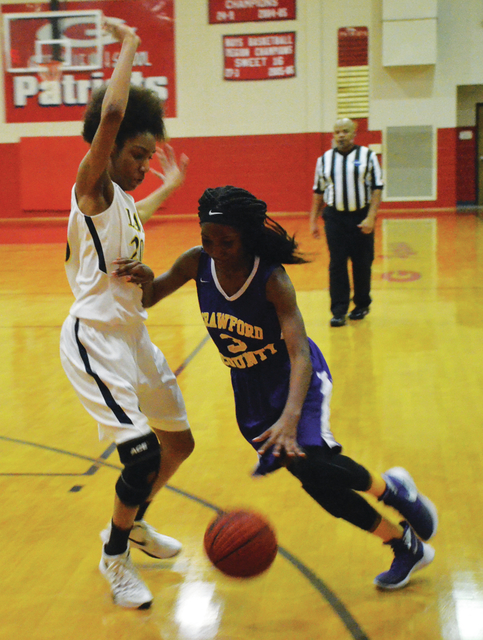 GREENVILLE – The Troup Lady Tigers, returning to the court after an absence of more than a week, showed no signs of rust during a blowout win over Crawford County on Monday.

In the opening round of the Meriwether County Holiday Classic at Greenville High, Troup blew the game open early on the way to a 69-27 victory.

Troup, which improved to 5-4, will face the host Manchester team at 7 p.m. today, with the winner advancing to the championship game on Wednesday at 6:30 p.m.

The Lady Tigers continued to pour it on in the second half, and by the time the third quarter ended, they led 57-17.

“They played really well,” Troup head coach Carla Thornton said. “They played real good team ball. And they stepped up in the post, which we’ve been lacking. That’s our weakness. We don’t have a true post player. Any time we go against size, we’re going to struggle a little bit. So it was good to see some of those girls step up.”

Following a loss to Callaway on Dec. 19, Thornton gave her players what she figured was some much-needed time off, so she wasn’t sure what to expect in Monday’s game.

“I was a little worried,” Thornton said. “I gave them more of a break than I usually do. But they needed some rest. We had some girls banged up. Sometimes you need it.”

After the tournament, Troup will turn its attention to its Region 5-AAAA schedule.

Troup will play its region opener on Jan. 5 at Sandy Creek.