Troup survives thanks to buzzer-beater 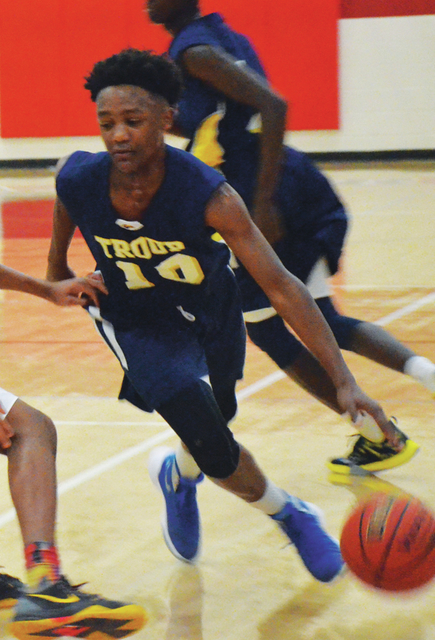 Jarrious Jefferson made a shot at the buzzer to lift Troup to a 54-53 win over Greenville on Monday. Kevin Eckleberry | Daily News

http://lagrangenews.com/wp-content/uploads/sites/37/2015/12/web1_jefferson.jpgJarrious Jefferson made a shot at the buzzer to lift Troup to a 54-53 win over Greenville on Monday. Kevin Eckleberry | Daily News

GREENVILLE – Thanks to some last-second heroics by Jarrious Jefferson, the Troup Tigers still have a chance to win a tournament championship.

Jefferson hit a shot at the buzzer to lift the Tigers to a 54-53 win over the home-standing Greenville Patriots in the opening game of the Meriwether County Holiday Classic on Monday.

The Tigers, who improved to 5-4, can move a step closer to a tournament title with a win over the host Manchester Blue Devils today at 8:30 p.m.

If Troup wins that game, it would play for the championship on Wednesday at 8 p.m.

In Monday’s game, Troup was down by one point when Jefferson, a sophomore guard, drove to the basket and laid the ball in to give his team the thrilling win.

After falling behind 9-7 after the first quarter, the Tigers were ahead 22-20 at the half.

The Patriots rallied to take a 42-39 through three periods, but it was the Tigers getting the big play at the end to seize the win.

Today’s game will be a rematch of a dramatic game from earlier this month.

Manchester had a 15-point lead with about four minutes to play, but Troup came storming back to win 67-65.

Jefferson provided some late heroics in that game as well with the go-ahead shot with a few seconds remaining.

Grant Whitley hit a 3-pointer to tie it with 10 seconds left, and after a turnover, Jefferson hit the game-winning shot.