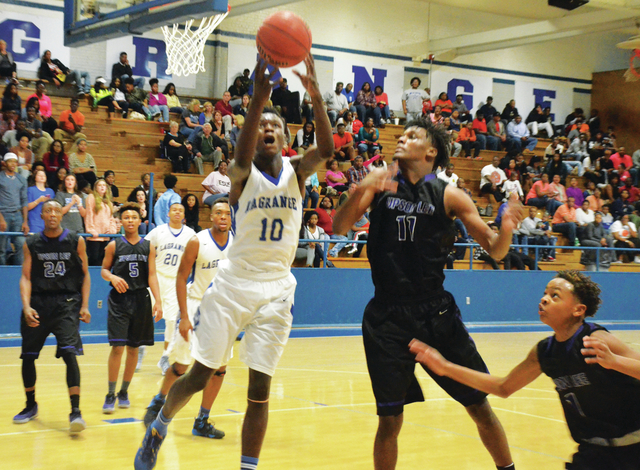 LAGRANGE – The LaGrange Grangers didn’t have an answer for a hot-shooting Upson-Lee team.

After dispatching WD Mohammed in the first round of the LaGrange Toyota Basketball Classic on Monday, LaGrange returned to the court on Tuesday hoping to move a step closer to a tournament championship.

Instead, it was Upson-Lee using a 27-point third quarter to beat LaGrange 77-65 and move to 2-0 in the tournament.

LaGrange (10-2) will try to finish its tournament stay on a positive note with a win over Lithia Springs today at 6 p.m.

That will be the Grangers’ final game until they begin their Region 1-AAAAA schedule on Jan. 5 against Hardaway.

In Tuesday’s game, the Grangers had a 32-31 lead at the half, but they were outscored 27-16 in the third period to fall behind by 10 points as the final quarter began.

LaGrange got within six points a few times in the fourth period, but Upson-Lee always had an answer.

The Knights got it done from long distance.

After making just two 3-pointers in a win over Lithia Springs in a first-round game on Monday, the Knights knocked down 11 shots from long range against LaGrange.

Four of those 3-pointers came during the decisive third quarter.

Derieko Smith had a big night for LaGrange with 24 points, and Gabe Duckett made made four 3-pointers and scored 16 points.

Mike Hardy added 12 points, and he had nine points in the fourth quarter to help LaGrange stay within shouting distance.

“I didn’t think we played particularly poorly,” Veal said. “We’d make a run and get it close, and then we’d have a turnover, or they’d hit a shot.”

Smith scored nine points in the first quarter to help the Grangers surged to a 17-14 lead.

The Grangers led by as many as five points in the second period when Kenan Gray scored after pulling down an offensive rebound, but by the half their lead was just one point.

The Knights took over in the third quarter.

Walker hit a 3-pointer early in the third period to put the Knights on top 36-35, and they led the rest of the game.

The Grangers, after falling by six points, got within two when Bo Russell scored with 2:13 left in the third period, but by the time the quarter ended the Knights had a 58-48 lead.

Seven different players scored at least two points in the third quarter for the Knights.

The Grangers hung around in the fourth quarter.

They got within six when Hardy completed a three-point play with 6:28 to play, but they came no closer the rest of the way.

With 3:25 to play, Duckett knocked down a 3-pointer to cut the deficit to 67-61, but the Knights scored the next four points to build the lead back up to 10, and the Grangers came no closer than eight for the remainder of the game.

In today’s game, LaGrange will take on a Lithia Springs team that evened its tournament record at 1-1 wtih a 71-69 victory over Opelika.

LaGrange is looking to avoid its first losing streak of the season.