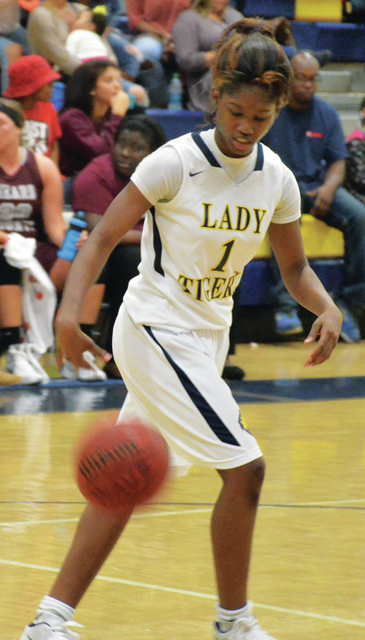 MANCHESTER – They are one win from a championship.

Troup will play in the championship game today at 6:30 p.m. at Manchester High School.

Troup opened its tournament stay with a suspense-free 69-27 victory over Crawford County on Monday.

That win set up a showdown with the host team a day later.

The Lady Tigers surged to a 47-29 lead through three periods, and they withstood a charge by the Lady Blue Devils in the fourth quarter.

The Lady Tigers took control early, charging to a 12-2 lead after the first quarter, and they were ahead 31-16 at the half.

Troup kept it going in the third period, outscoring Manchester 16-13 to take an 18-point lead into the fourth quarter.

The Lady Tigers improved to 6-4, and if they win today, they’ll carry a three-game winning streak into their Region 5-AAAA opener on Jan. 5 against Sandy Creek.

Also on Tuesday, the Troup boys’ team was back on the court after beginning its tournament stay with a 54-53 win over Greenville.

The Tigers won that game when Jarrious Jefferson scored at the buzzer to lift his team to the one-point win.

Unfortunately for the Tigers, that momentum didn’t carry over to Tuesday’s game.

Facing Manchester for the second time this season, Troup had a difficult time getting anything going offensively on the way to a 62-45 loss.

Isaac Moss was the only Troup player in double figures with 10 points, and Jefferson added seven points.

The Tigers don’t have a tournament game today, and they’ll bring a 5-5 record into their Region 5-AAAA opener at Sandy Creek on Jan. 5.