They’ve got one more game to play 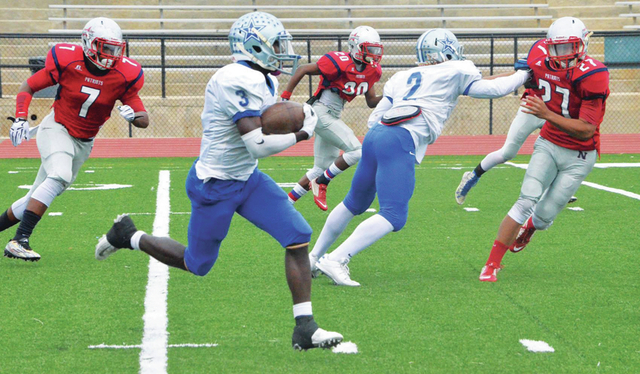 LaPerion Perry, who had a terrific junior season as the quarterback for the LaGrange Grangers, is playing in the Georgia Junior Bowl on Thursday. Kevin Eckleberry | Daily News

http://lagrangenews.com/wp-content/uploads/sites/37/2015/12/web1_perry1.jpgLaPerion Perry, who had a terrific junior season as the quarterback for the LaGrange Grangers, is playing in the Georgia Junior Bowl on Thursday. Kevin Eckleberry | Daily News

LAGRANGE – LaPerion Perry isn’t with his teammates on the LaGrange High basketball team this week, but he’s got a pretty good excuse.

Perry, along with Callaway’s Braylon Sanders, is preparing to play in an all-star football game.

Perry and Sanders, who are both coming off exceptional junior seasons, will be playing in the Georgia Junior Bowl on Thursday at 2 p.m.

The game, which is for players who will be seniors next football season, will be contested at Five Star Stadium at Mercer University in Macon.

Sanders and Perry, just as they were in the first game of the regular season when Callaway and LaGrange faced off, will be on opposite sidelines for the game.

The players have been divided into two teams.

Sanders will be on team Dedication, while Perry will be playing for team Commitment.

The players have been in Macon for the past few days, and they’ve spent a lot of time on the practice field, giving them a chance to make an impression on college scouts.

Although Perry and Sanders were primarily quarterbacks last season, they’re listed as wide receivers for their all-star teams, and they’ve been working at that position in practice.

Perry, after showing off his offensive versatility during his sophomore season, was given the chance to play quarterback as a junior, and he excelled in that role.

Although the Grangers finished 5-5 and didn’t make it to the state playoffs, Perry led a high-powered offense that got better as the season went along.

In one memorable game, a 51-50 loss to Carver, Perry had two touchdown passes, two scoring runs, and he had more than 400 combined yards.

Perry was injured in the regular-season finale against Northside, and he was unable to play in the mini-playoff game against Columbus.

The Grangers lost that game, denying them a state-playoff spot.

Sanders had a breakout season as a wide receiver in 2014, but he was moved to quarterback before this past season.

Sanders played well at quarterback and was leading an offense that was putting up big numbers, but he suffered a knee injury during the sixth game of the season.

Sanders returned in time for the state-playoff opener against Hart County, and he moved back to wide receiver while Dylan Johnson played quarterback.

Johnson was injured in that Hart County game, though, and Sanders ended up moving back to quarterback, and that’s where he remained until Callaway was eliminated from the playoffs by Westminster in the second round.

After Thursday’s game, Perry and Sanders will rejoin their respective basketball teams in time for the start of region play next week.

OF NOTE: LaGrange’s Amad Ogletree and Lafayette Christian School’s Eli Shepherd are playing in the Offense-Defense All-American Bowl in Daytona Beach on Friday. For more on that game and the players involved, see Thursday’s sports section.