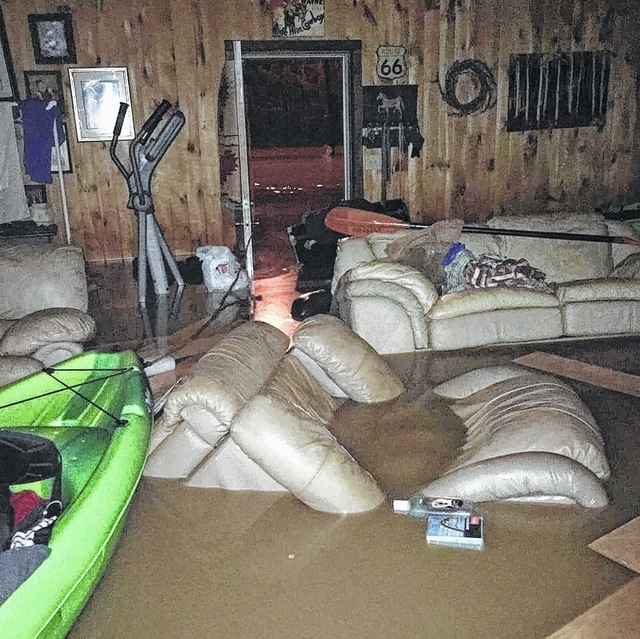 Brennan Taylor, right, and Jamie Sims place furniture ruined in flooding into a dumpster Tuesday outside Taylor’s home near Hogansville.

http://lagrangenews.com/wp-content/uploads/sites/37/2015/12/web1_House02WEB.jpgBrennan Taylor, right, and Jamie Sims place furniture ruined in flooding into a dumpster Tuesday outside Taylor’s home near Hogansville. HOGANSVILLE — As an avid kayaker, Brennan Taylor is at home on the water, but when the water is in his home, it’s a different story.

Taylor is one of at least 40 people displaced in Troup County after torrential rains swelled waterways last week, one of which flooded the house he built with his father 11 years ago.

“It’s like a disaster area,” he said Tuesday as he and a friend, Jamie Sims, pulled ruined furniture and electronics out of the house to a dumpster outside.

“Pretty much everything’s going to get tossed,” he said.

On Christmas Eve, Taylor’s parents were visiting from Florida as Yellow Jacket Creek behind his home on Timberlake Trail began to rise. They were cooking Christmas dinner — a ham, collard greens and black eyed peas, he said.

The creek has risen before, Taylor said. Sometimes the water laps at his doorways, but once the water started coming in his home Thursday, he knew he had a problem.

By the time the creek crested, the water was high enough inside his cabin to cover the doorknobs. His bed was floating in the middle of his living room, and, needless today, the Christmas ham was ruined.

Taylor said he used a wet suit he has for kayaking to wade into the house and rescue a few articles of clothing, but that was about it. To make matters worse, he doesn’t have insurance because he owns the home outright.

“I checked into it, and it was about $900 a month for flood insurance,” he said.

Taylor, who works on an assembly line at an auto parts manufacturer, is staying with friends while he figures out what to do next, he said.

One of his friends, Anna Kirkpatrick, a Spanish teacher at LaGrange Academy who met Taylor through kayaking, said when she heard about the damage, she knew she had to do something. She started an online fundraiser to help crowdsource money to help her friend.

“Brennan is a very hard working person,” she said. “He would give you the shirt off the back if he had to. He’s very selfless and compassionate, and he would do the same for others in this situation.”

As of this morning, the online fundraiser had more than $1,000 in donations from 26 people in three days.

Taylor said he’s grateful for the support, even overwhelmed by the generosity of his friends. He’s an independent and proud man, and he admits he didn’t want to be propped up by other people.

Still, standing in his muddy living room Tuesday holding a ruined cable box and wondering aloud if the cable company would charge him for it, he knows he can’t repair his life and home alone.

In the meantime, Taylor said he still plans to kayak, even though his relationship with water might be a little different now.

“Being out on the water is ultimate freedom,” he said. “It’s just real peaceful, it gets you away, don’t have to think about work or money. It’s that connection with Mother Nature. You don’t control the river, obviously after this happened, but the water allows you to flow.”

After removing some of his ruined possessions from his home Tuesday, he said he planned to go kayaking on the same creek that took so much from him. Now, it’s time for him to get something from the water — peace of mind.

“I’m going to get some payback,” he said.