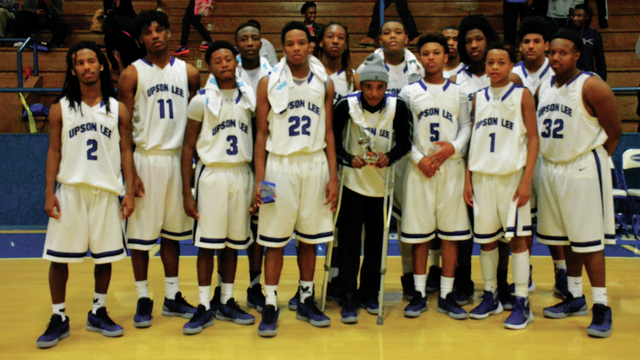 Upson-Lee’s Trevon Walker looks for someone to pass to during the second half of Wednesday’s championship game. Kevin Eckleberry | Daily News

http://lagrangenews.com/wp-content/uploads/sites/37/2015/12/web1_knights2.jpgUpson-Lee’s Trevon Walker looks for someone to pass to during the second half of Wednesday’s championship game. Kevin Eckleberry | Daily News LAGRANGE – Upson-Lee was the class of the field.

The Knights completed a perfect stay in the LaGrange Toyota Basketball Classic with a 67-53 win over Mundy’s Mill on Wednesday at LaGrange High.

Upson-Lee, which also beat Lithia Springs and LaGrange in the tournament, improved to 11-3 as it heads into its region schedule next week.

“We’re coming along, but we’ve got a lot of work to do,” Upson-Lee head coach Darrell Lockhart said.

Lithia Springs, which beat Opelika and WD Mohammed the first two days of the tournament, stayed within shouting distance for much of the game and was only down by seven points with less than four minutes to play, but Upson-Lee was too strong.

Trevon Walker was also in double figures with 14 points.

“It’s tiring,” Lockhart said. “It’s the games, plus the bus trips back and forth. It’s challenging. But it’s the kind of challenge we need, playing good teams so you can get ready for region play.”

The Knights were ahead 19-12 after the first quarter, and they extended that lead to 33-18 at the half.

Mundy’s Mill started to make up some ground in the third period, and it got as close as six points, but by the time the fourth quarter rolled around, Upson-Lee had a 50-37 lead.

Mundy’s Mill climbed to within seven points when Kaelon Harris, who had a monster game with 33 points, powered home a dunk with 3:30 to play in the fourth quarter.

The Knights were able to pull away from there to win by 14 points.

Also on Wednesday, it was Opelika edging WD Mohammed 58-55.

Opelika finished the tournament with a 1-2 record, while WD Mohammed went 0-3.