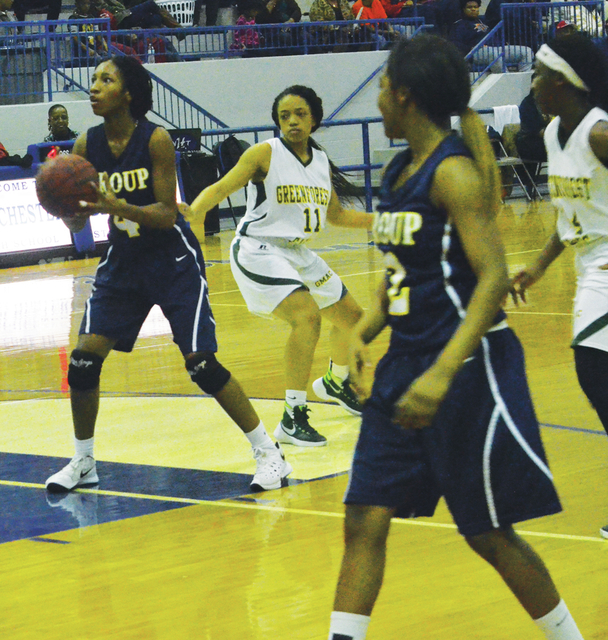 Troup’s Jedda Madden gets ready to put up a shot during Wednesday’s game at Manchester High School against Greenforest. Kevin Eckleberry | Daily News

http://lagrangenews.com/wp-content/uploads/sites/37/2015/12/web1_troup5.jpgTroup’s Jedda Madden gets ready to put up a shot during Wednesday’s game at Manchester High School against Greenforest. Kevin Eckleberry | Daily News

MANCHESTER – They didn’t bring home the first-place trophy, but it was still a successful stay for the Troup Lady Tigers in the Meriwether County Holiday Classic.

Troup will carry a 6-5 record into Tuesday’s Region 5-AAAA opener at Sandy Creek.

“It’s a confidence boost,” Troup head coach Carla Thornton said of the strong tournament showing. “We see we can play with anybody. We see what we can do when we’re all on the same page, and we’re all clicking.”

In the championship game, it was tied heading into the final quarter, and Greenforest outscored Troup 15-7 in the fourth period to win going away.

“We got tired, made mental mistakes,” said Thornton, whose team was playing for the third time in as many days. “Anytime you turn the ball over up top, that’s two points the other way, because nobody can get back. That kind of stops your momentum.”

Still, Troup was right there with a chance against a Greenforest team that hasn’t lost a game this season.

It was a familiar story for the Lady Tigers, who have had been in every one of the games they’ve lost.

“We were in every game,” Thornton said. “You hate to have moral victories, but all the games we lost we could have won, so that’s the positive thing about it.”

The Lady Tigers struggled a bit offensively in Wednesday’s game.

Kwyneshia Spence scored 16 points, and she was the only Troup player in double figures.

The Lady Tigers trailed 10-7 after the first period, but they rallied in the second quarter to take a 19-15 lead at the half.

Trailing 15-12, the Lady Tigers finished the first half on a 7-0 run to take some momentum into the halftime break.

Spence made a layup to give Troup a 16-15 lead, and she knocked down a 3-pointer to cap the first-half scoring.

After Greenforest scored the first four points of the second half to pull even, Spence made another 3-pointer to give her team a 22-19 lead midway through the third quarter.

It remained tight for the rest of the quarter, and by the time final period got under way, the game was deadlocked at 25-25.

It was tied at 27-27 when Greenforest went on a 6-0 to run to build a six-point lead with two minutes left in the game.

Spence came up with a steal and made a layup to get the Lady Tigers within two with 1:14 remaining, but Arielle Holloway converted a three-point play 12 seconds later to give the Lady Eagles a seven-point cushion.

Spence answered with a basket with 52 seconds remaining to make it a five-point game, but that’s as close as the Lady Tigers came.

The Lady Tigers will take a few well-deserved days off to “rest up and heal” as Thornton put it before Tuesday’s region opener.

Troup’s boys’ team also participated in the Meriwether tournament, and it went 1-1.

Troup, which didn’t play on Wednesday, will carry a 5-5 record into Tuesday’s game at Sandy Creek.