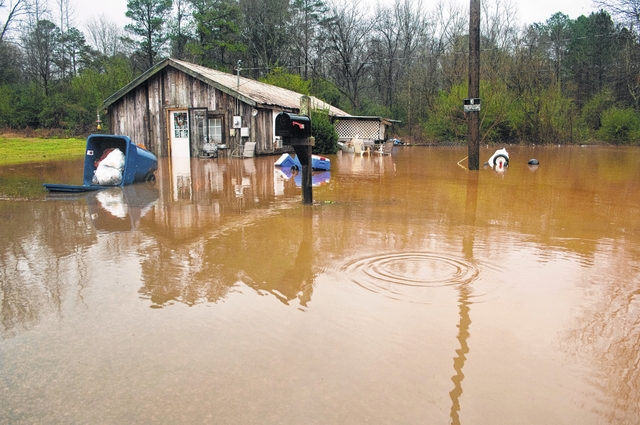 A home on Leathea Drive in LaGrange sits flooded Dec. 24 after heavy rainfall. A state of emergency in Troup County was declared by Gov. Nathan Deal on Wednesday after days of heavy rainfall and flooding.

http://lagrangenews.com/wp-content/uploads/sites/37/2015/12/web1_RGB_Flooding02CMYK5.jpgA home on Leathea Drive in LaGrange sits flooded Dec. 24 after heavy rainfall. A state of emergency in Troup County was declared by Gov. Nathan Deal on Wednesday after days of heavy rainfall and flooding.

The executive order paves the way for state-level manpower and resources to respond to local damage caused by excessive rainfall during the past week, according to county fire chief and emergency manager Dennis Knight.

Determinations are underway about what kind of aid the state will provide the county, according to Knight, who is coordinating with state officials. The assistance may come in the form of state labor, equipment and materials needed for road repair, he said.

County officials said floods caused at least half a million dollars in damage.

As many as 40 people from 14 families were displaced by flooding, the local American Red Cross chapter said Wednesday. County roads engineer James Emery reported at least 38 roads were damaged or overrun with water during storms. Surveyors from the Georgia Department of Transportation’s regional office in Thomaston were already working this week assisting county staff with road inspections, Emery said.

County Commission Chairman Patrick Crews said today he and county staff contacted the governor’s office and state emergency agencies after the initial flooding, and pushed for the county to be added to the disaster declaration.

“We felt like we really needed to push hard for this, because with the holidays, we didn’t want to get lost in the shuffle,” Crews said.

Road damage countywide ranges from buckled pavement to streets entirely washed away. Trouble spots are spread throughout the county, from Blanks Road north of Hogansville to Bill Taylor Road in southern Troup County.

“In the 11 years that I’ve been with the county, this is the worst flooding event I’ve seen,” said Emery.

New problems continue to emerge as residual rainfall makes its way through area waterways. On Wednesday evening, the county added Cook and Dallas Mill roads to a list of closures.

“The water is beginning to recede in most places, but in some places, the larger creeks will continue to rise for another day or two,” Emery said. “I don’t know if we’ll have more bridges underwater tomorrow or tomorrow night.”

The road repair work could take months, but may be completed more quickly with assistance from the state under Deal’s declaration. County officials hope the state’s aid will offset some of the cost to local taxpayers.

“Some of the types of manpower I already have on staff, but the materials can be very expensive,” Emery said. “I’m really hoping that materials will be provided by the state, so that they can help in that form.”