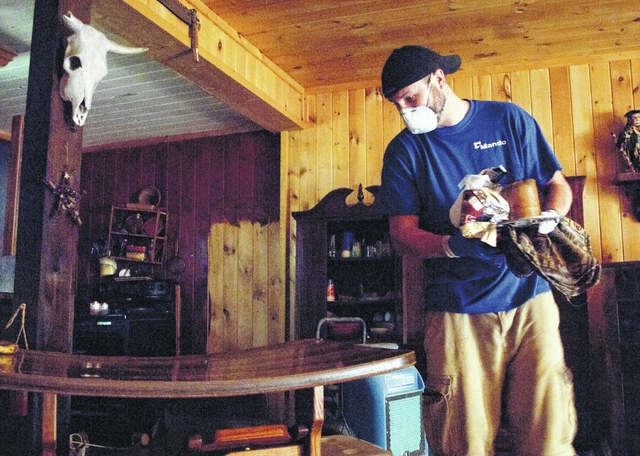 A view outside the Ideal Cleaners on Greenville Street on Dec. 24.

http://lagrangenews.com/wp-content/uploads/sites/37/2016/01/web1_ReaderPhoto03.jpgA view outside the Ideal Cleaners on Greenville Street on Dec. 24.

LaGRANGE — As rain subsides and floodwaters begin to recede, the true extent of storms that dumped 15.03 inches of rain on the county during the last 10 days is finally being revealed.

Officials initially estimate at least half a million dollars in damage was done to local roads and Gov. Nathan Deal on Wednesday declared a state of emergency in the county.

The American Red Cross said 41 people from 14 families in the county were displaced by flooding as of Thursday afternoon.

People weren’t the only ones affected: 99 animals — 84 dogs and 15 cats — had to be evacuated from the LaGrange Animal Shelter on Wednesday after concerns about a rising creek nearby.

The recovery could take months, but with the governor’s emergency declaration, state-level manpower and resources may be available to help repair damaged roads and public facilities.

County roads and engineering staff, along with state transportation officials, are already out surveying the damage, which county engineer James Emery said was the worst he’s seen in more than a decade.

Dennis Knight, the county’s fire chief and emergency manager, said Thursday he and other county officials are scheduled to meet with representatives from the Georgia Emergency Management Agency and Georgia Department of Transportation to figure out the next steps. In the meantime, Knight encouraged drivers to be vigilant and watch for closed roads and lane restrictions.

“We’ll discuss plans moving forward on making repairs to local roads and try to find out what assistance they (the state) can provide,” Knight said. “We should have a better time frame after that.”

Now a week since the deluge, the money the American Red Cross gave flood victims for hotel rooms is starting to run out.

Amanda Folds, 35, lived in a house on Leathea Drive with her mother and two daughters. They were forced to evacuate Dec. 24 when a tributary of Pepperell Creek overtook their home. After a week in a hotel, today is their last day.

“I don’t know what we’re going to do,” she said Thursday. “There’s no more funds available and I’m trying to find a place to go.”

Folds worried she and her family might end up sleeping in her minivan.

In the meantime, she’s been at her home trying to salvage what she can. The electricity is shut off because of fire risk and she’s throwing away most what once were her belongings.

Elsewhere in the county, Yellow Jacket Creek finally began to recede Thursday. On Wednesday, Brennan Taylor, 30, who lives next to the creek, said he grew concerned when the waters appeared to be rising again. His cabin was flooded Christmas Eve with water high enough to hide doorknobs. All week, he’s been at his former home throwing away his furniture and trying to decide what to do next.

The chapter covers 20 counties and he said Troup County had more cases than any other.

“This is a major disaster relief operation, and it’s all across the state,” he said. “It is still going on. We had four cases (Wednesday) night in the chapter, but not here in LaGrange.”

Harman urged the community to be involved in helping those affected by the flooding. The American Red Cross, he said, is not equipped to handle long-term recovery and aid to disaster victims.

“We don’t offer long-term support, we don’t have the resources to do that,” he said.

“What we want is for these folks to get back to their normal lives,” he said. “We understand that’s going to take a while to happen. The community really needs to step up and help people out.”