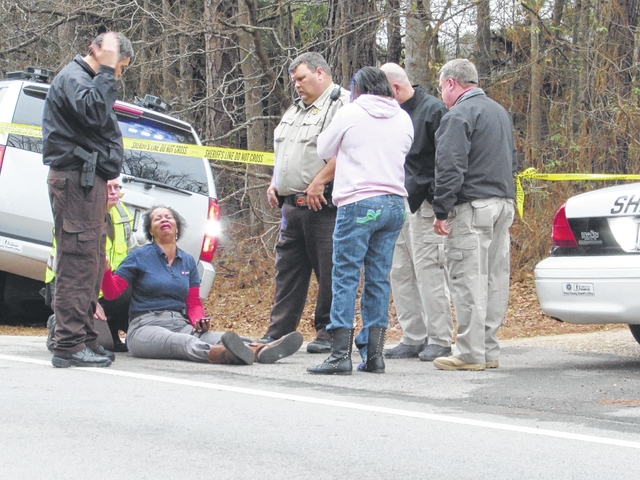 In this April 2001 file photo, ‘Rusty’ Houser walks down Main Street in LaGrange next to his bar, Rusty’s Buckhead Pub, displaying a banner to compare a LaGrange City Council decision to pull his alcohol license to Nazi tactics. Houser on July 23 entered a theater in Lafayette, La., and shot several people, killing two and then himself.

http://lagrangenews.com/wp-content/uploads/sites/37/2016/01/web1_0101TopStories02.jpgIn this April 2001 file photo, ‘Rusty’ Houser walks down Main Street in LaGrange next to his bar, Rusty’s Buckhead Pub, displaying a banner to compare a LaGrange City Council decision to pull his alcohol license to Nazi tactics. Houser on July 23 entered a theater in Lafayette, La., and shot several people, killing two and then himself.

Marchers with the NAACP’s Journey for Justice approach LaGrange on West Point Road on Aug. 8. The nearly 900-mile march from Selma, Ala., to Washington, D.C., was aimed at raising awareness on the issues of education, economic inequality, criminal justice reform and voting rights.

http://lagrangenews.com/wp-content/uploads/sites/37/2016/01/web1_0101TopStories03.jpgMarchers with the NAACP’s Journey for Justice approach LaGrange on West Point Road on Aug. 8. The nearly 900-mile march from Selma, Ala., to Washington, D.C., was aimed at raising awareness on the issues of education, economic inequality, criminal justice reform and voting rights.

Rose Jackson collapses in the street after learning her daughter, Courtney Jackson, was fatally shot by her boyfriend on Jan. 14. She later told the Daily News that she hopes this photo ‘will impact someone to take domestic violence seriously.’

http://lagrangenews.com/wp-content/uploads/sites/37/2016/01/web1_0101TopStories04.jpgRose Jackson collapses in the street after learning her daughter, Courtney Jackson, was fatally shot by her boyfriend on Jan. 14. She later told the Daily News that she hopes this photo ‘will impact someone to take domestic violence seriously.’

The most talked about and tragic story in Troup County this year started the year in late January. After deputies responded Jan. 31 to a house on Woodstream Trail to check on the welfare of its occupants, they found a grisly scene with five people dead inside the family home.

Christie Lee, 39; her daughter, Bailey Burtron, 16; mother and father Shelia and William Burtron, 68 and 69, respectively; and a family friend and neighbor, Iiaonna Green, 18, lost their lives at the hands of Thomas Lee, 26, the husband of Christie Lee. After a nationwide manhunt, Lee was arrested in Mississippi after an unsuspecting pastor gave him money for a bus ride to Opelika, Alabama, before seeing Lee’s picture on national news.

Troup High School held a vigil to remember the two young victims, Green and Bailey Burtron, who had attended the school. Other vigils also highlighted the victims.

Aug. 12, almost seven months after the murders, Lee pleaded guilty but mentally ill in Troup County Superior Court. He was sentenced to life in prison without the possibility of parole.

Local attention turned to the health of West Georgia Health this year as it sought to partner with another hospital in order to weather the financial difficulties of recent years.

The financial concerns raised some questions in the community after the hospital had embarked on expansions over the last decade, including a taxpayer-backed bond to build the $70 million south tower. As the hospital searched for a partner, it assured residents that the bond payments would continue to be honored and the partnership would be in the best interest of the hospital and community.

On May 19, West Georgia Health announced WellStar, a Marrieta-based healthcare organization, was set to partner with it. The move was confirmed by the hospitals’ boards in November and is awaiting approval from the state attorney general’s office pending a Jan. 20 public hearing.

3. Floods cause state of emergency

One of the most significant events in Troup County ended the year.

A deluge of heavy rains flooded homes and roads, displaced families, washed out roads — causing longterm damage — and even led to Gov. Nathan Deal declaring a state of emergency in Troup County.

The community is still dealing with the effects of this El Niño-influenced weather while the total effects of damage to both public and private property has yet to be tallied.

4. Gang violence erupts in first half of year

Gang violence erupted publicly early in 2015 with a rash of gang-related shootings in southwest LaGrange.

The incidents between rival gangs, mostly the Bloods and Gangster Disciples out of Atlanta, marked a temporary crime wave in the first half of the year as LaGrange police worked to crack down on the violence and inform the public about the threat gangs pose locally.

One of the most prominent incidents was the April 14 shooting death of Tony Kennedy, 21, near his home on McGregor Street. Police say gang members were actually targeting a person standing with Kennedy. Four people are awaiting trial in the case.

2015 was a good year for economic development with several high-profile announcements in the news.

Walmart Neighborhood Market opened on Lafayette Parkway in January, adding a major retailer to the corridor and adding jobs. It was followed by Badcock announcing it would place a distribution center in LaGrange and Caterpillar announced that its long-planned expansion at the local facility.

Planned projects for a Great Wolf water park and resort to open near Interstate 85 and expansion at LaGrange Mall got a boost with local government support for a tax break for investment.

There was also movement in the long-planned downtown hotel, slated to go at the location where the former Mansour’s building now sits, after city leaders reached an agreement with a developer for construction.

Sweetland Amphitheater is almost complete with a grand opening set early this year. Funded by the special-purpose, local-option sales tax, city of LaGrange and Callaway Foundation, the project is anticipated to draw national acts.

6. Louisiana theater shooter had troubled past in LaGrange

When a shooter entered a theater in Lafayette, Louisiana, on July 23 and opened fire, killing two people and injuring several others before he turned the gun on himself, media outlets began to dig into his past. As it turns out, that past had a significant LaGrange connection.

John Russell “Rusty” Houser was a LaGrange bar owner and made headlines here when he was convicted in 2001 for serving alcohol to minors. After LaGrange City Council then pulled his liquor license, he made an appeal in council chambers, which was denied. After that, he displayed a Nazi flag outside his business in protest.

The Daily News’ digging up of the particulars in Houser’s time in LaGrange added more to the national backstory of bizarre behavior that preceded his rampage.

School news was punctuated with some contentious issues mixed with progress and positive events.

The Board of Education drew ire as it voted to close another elementary school, this time Mountville. Despite pleas from residents and staff, the board cited financial concerns in its decision.

However, on the flip side, the rebuilt bigger and more advanced Ethel W. Kight Elementary School and public-private funded, workforce training-based THINC academy for high school students opened their doors.

Rosemont Elementary School also was selected as a National Blue Ribbon School, an honor bestowed by the federal Secretary of Education denoting a school’s outstanding commitment to education and its students.

Some controversies surfaced during the year, though, including parents upset over a “no pay, no play” policy at Callaway Elementary School after some children were allegedly left out of field day for overdue lunch fees. Parents also came out in force in January to raise concerns about recent changes to classes at Gardner Newman Middle School, but weren’t allowed to speak at the meeting, which raised more concerns over the board’s restrictive policy for the public to speak at meetings.

A creationist who debated evolution spoke to a Troup High School class, which caught the attention of a group advocating separation of church and state alleging constitutional violations. The school system said Hovind left out any religious arguments from his presentation, and the group eventually withdrew its threat of legal action.

The Journey for Justice — a march aimed at bringing awareness to the issues of voting rights, criminal justice reform, education and employment, organized by the NAACP — from Selma, Alabama, to Washington, D.C., came through Troup County in August. It brought people from across the nation who walked through county and city streets.

In March, marking the 50th anniversary of the original Selma march and “Bloody Sunday,” nearly 60 people from the Troup County area came to Selma for the event attended by an estimated 100,000 people.

In response to the growing gang violence in LaGrange, the newly formed Unity Community Group organized a series of marches through the areas most affected by shootings in order to show solidarity in promoting peace.

Two former elected officials became the frontmen for a racial reconciliation initiative to take a proactive approach to race relations. The initiative, which would take 40 people every three months through the program, did raise criticism from people after the two sought and were pledged a total $100,000 in public funds from the local governments.

The tax commissioner, Gary Wood, took a divisive stance in June when he opted to remove a license plate bearing the Confederate flag from a display in the tag office.

The move followed a racially motivated shooting in a Charleston, South Carolina, African-American church that killed nine people. South Carolina’s legislature debated and eventually opted to remove the Confederate flag from its government building and other states raised similar issues.

A murder-suicide at a family home on Roanoke Road highlighted the issue of domestic violence.

On Jan. 14, Kendell Robinson, 26, killed his live-in girlfriend, 22-year-old Courtney Jackson, by shooting her multiple times. He then fatally shot himself. Jackson had a 3-year-old son.

However, the silver lining of the tragedy came when the victim’s mother, Rose Jackson, spoke out about the signs of domestic violence she later recognized in her daughter’s relationship. She decided to make herself an advocate to help others avoid the tragedy that she had suffered.

“I always knew God has something for me to do,” she said. “Now I know this is the plan.”