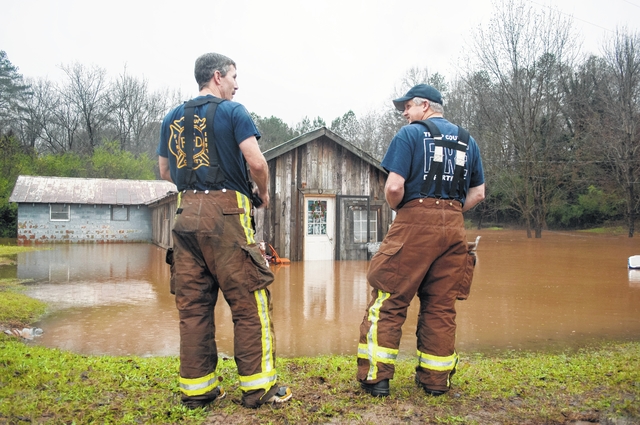 Firefighters inspect a flooded home on Leathea Drive on Dec. 24 after heavy rainfall.

http://lagrangenews.com/wp-content/uploads/sites/37/2016/01/web1_Flooding04CMYK.jpgFirefighters inspect a flooded home on Leathea Drive on Dec. 24 after heavy rainfall.

LaGRANGE — The owners of at least three homes damaged by floodwater and storms in Troup County last week were without flood or property insurance.

Without proper insurance, victims struggling to get back on their feet can find an even bigger problem as they try to regain a semblance of normalcy in their lives.

Flooding is the most common disaster in the United States, according to the Federal Emergency Management Agency, or FEMA. In 2014, NFIP paid out more than $345 million in flood insurance claims to policy holders.

A FIRM is used to determine a community’s base flood elevations, flood zones and floodplain boundaries. The map provides homeowners with reliable, data-driven indications of what flood stage their property may sit in.

In August, FEMA and other government representatives held a public meeting about revisions currently underway to the county’s FIRM.

Jay Anderson, the county’s senior building official, said in August the maps can help homeowners in determining the kind of insurance coverage they need.

“If (homes) are prone to potential flooding, (homeowners) could maybe do something to minimize damage or even loss of life,” Anderson said. “Anything they can do to be aware and minimize risk is to their advantage.”

Floods caused an average of $2.39 billion in damages yearly between 1998 and 2007. More than 5.5 million Americans are enrolled in the National Flood Insurance Program, according to FEMA.

Anderson also said Troup County residents can visit http://property.troupcountyga.org and use the “search records” feature to access a flood map of the area. To view the local map, click “search by map” and check the “flood zone” box in the left panel.