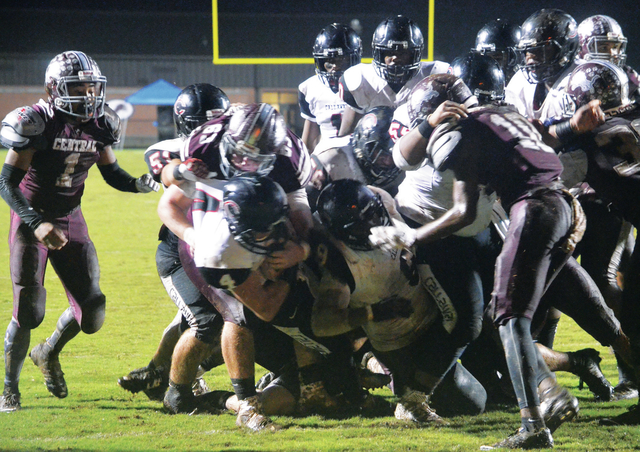 Callaway’s Quantrez Cooper goes to the basket during the first half of Saturday’s 84-76 win over Harris County. Kevin Eckleberry | Daily News

http://lagrangenews.com/wp-content/uploads/sites/37/2016/01/web1_CHS3.jpgCallaway’s Quantrez Cooper goes to the basket during the first half of Saturday’s 84-76 win over Harris County. Kevin Eckleberry | Daily News

HAMILTON – The Harris County Tigers made it interesting.

The Callaway Cavaliers had a seemingly comfortable 15-point lead late in the third quarter of Saturday’s game, but the homestanding Tigers weren’t going to go down without a fight.

The Tigers used a 15-0 run to pull even early in the fourth quarter, but it was the Cavaliers making the plays down the stretch to secure the 84-76 victory.

The Cavaliers, who hadn’t played in two weeks, improved to 5-2, and they’ll visit Lanett on Tuesday before beginning their Region 5-AAA schedule at Central-Carroll on Friday.

“We weathered the storm,” Callaway head coach Terry Hayes said. “The bottomline is, we got a victory.”

Seniors Ernest Patillo and Dre Martin did a lot of the scoring damage for the Cavaliers.

Patillo had a team-high 26 points, and eight of those points came on four dunks.

Martin added 25 points, and he made five 3-pointers.

The Cavaliers, who led by 11 points at the half, were ahead 65-50 late in the third quarter when the Tigers made their move.

A little more than a minute into the fourth quarter the Tigers deadlocked the score at 65-65, but the Cavaliers quickly regained control and were able to hold on for the road win.

The game was tight early, with the Cavaliers taking a 14-10 lead after the first quarter.

The Cavaliers exploded in the second period for 33 points to seize a 47-36 lead at the half.

The lead was four midway through the second quarter when Martin and Sanders hit back-to-back 3-pointers to give the Cavaliers their first double-digit lead of the game.

Martin scored 11 points to lead the second-quarter scoring attack,and his 3-pointer with 14 seconds left in the half capped the scoring.

Patillo had 11 points in the second quarter, giving him 17 points for the half.

The Cavaliers continued to pour it on in the second half, and when Joe Brown dunked with 2:40 left in the third quarter, the Tigers were down 65-50.

Harris County ended the third quarter on a 10-0 run, and Callaway took a 65-60 lead into the final period.

When Harris County’s Dmonte Huling scored with 6:54 left in the game, the game was tied at 65-65, and the home team had all the momentum.

“They ran the offense pretty well. Then they got complacent because we had a 15-point lead,” Hayes said of his players. “(Harris County) got back in it quick.”

The Cavaliers weren’t phased, though.

Patillo scored with 5:35 left in the game to put the Cavaliers back on top by two, and Martin hit a 3-pointer 15 seconds later to give his team a 70-65 lead.

The Tigers hung around for a while, and they were within four with 1:44 to play, but consecutive baskets by Patillo and Martin gave the Cavaliers an 80-72 lead with 48 seconds remaining.

The Tigers came no closer than six points the rest of the way.