Girl, 2, recovering after surgery, expected to survive after shooting 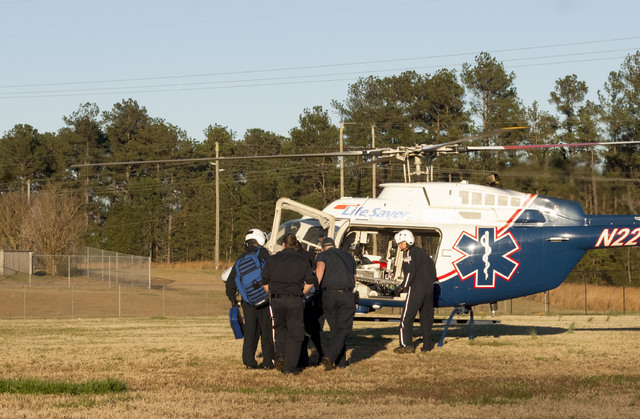 http://lagrangenews.com/wp-content/uploads/sites/37/2016/01/web1_0104ChildShot02WEB.jpgLaGrange Public Safety Chief Lou Dekmar, right, speaks with police Lt. Dale Strickland outside a residence in the Wood Glen Apartments after a 2-year-old girl was shot Monday afternoon. Emergency medical responders load a 2-year-old girl into a helicopter Monday afternoon after she was shot at about 4 p.m. in an apartment on North Cary Street.

LaGRANGE — A 2-year-old girl was recovering from surgery this morning after being shot Monday afternoon.

She was shot once in the torso by another unidentified child inside a home at the Wood Glen Apartments on North Cary Street shortly after 4 p.m., police said.

The 2 year old is expected to be hospitalized for about a week and make a full recovery, police said today.

The girl was conscious when first responders took her by ambulance to a nearby baseball field to meet a helicopter for air evacuation. She was flown to Children’s Healthcare of Atlanta at Egleston

Police said they believe the gunshot was accidental, but did not rule out criminal charges pending further investigation.

Two adults, including the girl’s mother, and four children — the victim and three other children ages 1, 3 and 10 — were inside the apartment when the gun fired, police said.

Police did not say which child found or fired the gun, which was described only as a handgun. Authorities recovered the gun inside the apartment. The gun’s owner was unknown at press time.

Detectives are investigating who was supposed to be supervising the children and how they were able to handle the gun.

The girl and her mother did not live in the apartment where the gunshot happened, police said.

Authorities were set today to file a report with the Division of Family and Children Services. DFCS could not be reached for comment by press time today.