‘I Never Saw Another Butterfly’ to open LSPA’s new year 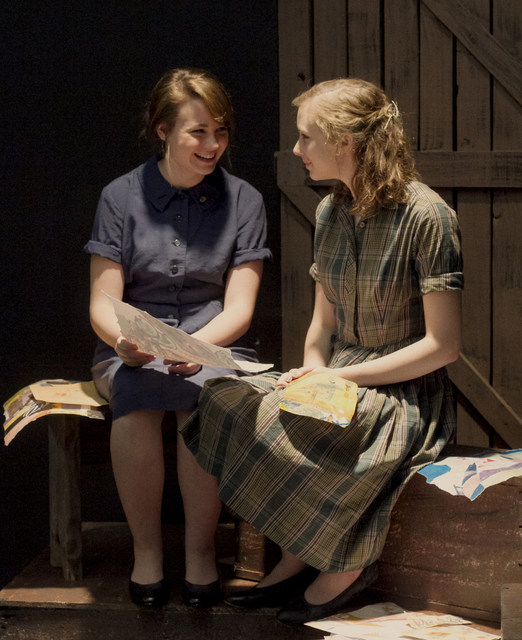 Actors Melanie Prater, left, and Phoebe Rushan rehearse for ‘I Never Saw Another Butterfly,’ a production of the Lafayette Theatre Academy that opens Thursday.

http://lagrangenews.com/wp-content/uploads/sites/37/2016/01/web1_0104LSPAPlayWEB2.jpgActors Melanie Prater, left, and Phoebe Rushan rehearse for ‘I Never Saw Another Butterfly,’ a production of the Lafayette Theatre Academy that opens Thursday.

LaGRANGE — The Lafayette Theater Academy is set to open its first production of the new year.

“I Never Saw Another Butterfly,” inspired by the words and artwork of children imprisoned in a World War II concentration camp, runs Thursday through Saturday at the Lafayette Society for Performing Arts’ black box theater, 214 Bull St.

The show tells the story of prominent artists, writers, musicians, scientists and scholars who were held in Terezín concentration camp in what is today the Czech Republic. The prisoners there worked diligently to provide education and cultural life for the children there, according to a press release from the LSPA.

Nazis went so far as to use the camp in propaganda designed to deceive the Western Allies regarding their treatment of the Jewish population, the release states.

“Though the play’s setting is during the Holocaust, the story being told focuses on the power of visual and performing art to sustain the human spirit, even in the darkest of times,” said Amy McDow, the show’s artistic director. “It is because of the artwork, poetry and prose created by the youth of Terezín that they were able to leave their legacy for us and that we have the honor of sharing it with others.”“

The cast showcases 37 young people from Troup and Chambers counties. They share the experiences of Raya, the show’s main character, and the other children of Terezín who learned art as a means of expression to add value to their daily life.

Much of the dialog of the script comes from the poetry, drawings, paintings and diaries that were buried by adults before their deportation.

Jennifer Shook, executive director of the Lafayette Society of Performing Arts, said the LSPA is honored to present such a challenging, but important show.

“LSPA is proud to be supporting the cultivation of local talent through our Lafayette Theatre Academy in this powerful production of hope and human purpose,” she said. “It is through artistic expression — the universal language — that people are united … one of the many reasons why LSPA’s mission is so important to the communities we serve.”

This week, the cast will be filling the Lafayette Square with butterflies to represent the 15,000 children who passed through the gates of the Terezín concentration camp, of which fewer than 150 survived.

Youth will be adding one white butterfly for every 100 colorful ones, providing a visual of the number of children survivors of the camp. The lobby of LSPA will also be filled with artwork created by the cast, including hundreds of handmade butterflies.

Following each production, the cast will greet the audience to share their art and experiences with their guests.

Refreshments will be provided by The Medicine Cabinet Soda Shoppe. In a statement, the LSPA thanked the UPS Store on Commerce Avenue and Resilient Floor Covering Institute on Broad Street for their support.