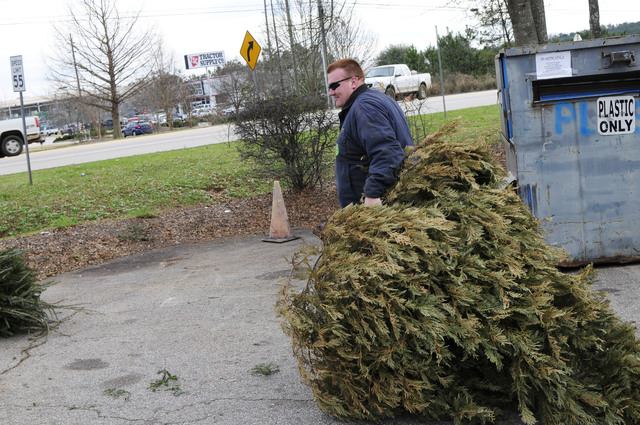 Scott Allen, recycling manager for the city of LaGrange, hauls a Christmas tree dropped off Saturday at the city’s recycling center at 530 S. Davis Road during the Bring One for the Chipper event hosted by Keep Troup Beautiful.

http://lagrangenews.com/wp-content/uploads/sites/37/2016/01/web1_WEB0104Chipper.jpgScott Allen, recycling manager for the city of LaGrange, hauls a Christmas tree dropped off Saturday at the city’s recycling center at 530 S. Davis Road during the Bring One for the Chipper event hosted by Keep Troup Beautiful.

LaGRANGE — Despite its name, no trees dropped off at Keep Troup Beautiful’s annual Bring One for the Chipper event have been ground up in the last three or four years, said KTB board chairman Howard Mingo.

Instead, fisherman have grabbed them up to use for fish habitats.

“We’ve had more people come try to pick them up than drop them off,” said Scott Allen, recycling manager for the city of LaGrange, who was out at the city’s recycling center at 530 S. Davis Road for the event Saturday.

Mingo added that the group had received “a few tree, which people have picked up for habitats.” He estimated at noon, halfway through the four-hour event, that they had about 20 to 25 trees dropped off, but only two sat in the drop-off area. The rest had been picked up.

Although Saturday’s event was aimed at collecting Christmas trees and electronics in the wake of the holiday season, Keep Troup Beautiful’s mission is to promote recycling. Setting up at the recycling center for the first time, Mingo was encouraged seeing people bringing their normal recycling products.

“We’re normally at Home Depot. We noticed an extraordinary amount of people (this year) taking recycling seriously … taking all that time to separate out and put (the different recycling materials) into separate bins. What the city is doing with the recycling thing is terrific.”

Mingo was referring to the city’s curbside recycling initiative, set to launch later this month. Allen said only 150 people have signed up for the program, and KTB officials felt more people need to take advantage of it.

Allen and Mingo noted an estimate by Ronnie Cantrell, the city’s public works manager, in December that the city could reduce its annual garbage production — about 22 million pounds — by 40 percent if all residents took advantage of the recycling program. Mingo said with the amount of participants he’d seen using the bins, he felt that was possible.

“I’m encouraged by that, I think we can do it with this (level of participation),” he said.

Any LaGrange residents who want to sign up for curbside recycling, which is no cost to the resident, may call the city at 706-883-2023 or visit www.lagrange-ga.org.

Under the new city program, which is set to begin in mid-January, sanitation workers will deliver new recycling cans to residents at no charge. All recyclables but glass — including metal, plastic, paper and cardboard — can be thrown in the recycle cans.

The program is “single-stream recycling,” meaning there is no need to sort the items by material. Although there is no charge for the program, residents must use the bins or they will be charged $50 for the cost of the can.

As the cans are delivered, instructions will go out for people to learn about when they’ll need to roll the recycling bin to the curb. The city has already received about 600 bins.