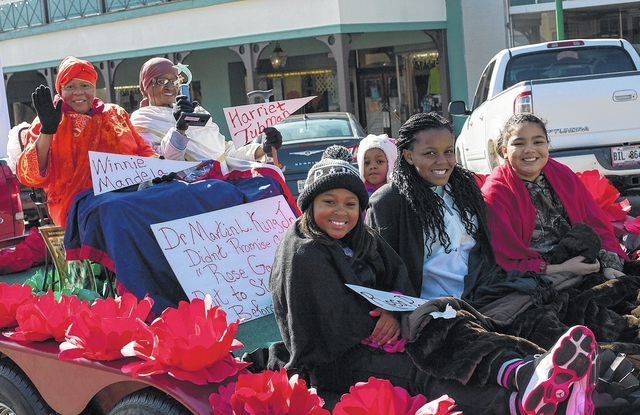 LaGRANGE — The organizers of the annual Martin Luther King Jr. Day Parade hope for a strong turnout of supporters this year.

The parade is slated to begin Saturday at 1 p.m. and will travel through Lafayette Square; it is open to the public and the route will be similar to the annual Christmas parade.

Yvonne Pittman, one of the parade’s lead organizers, said she’d like to see an increased the amount of spectators over last year’s numbers.

“I would love to see everybody come out for this parade,” she said. “It’s not just for black people, it’s for everybody, but for some reason you don’t seem to have the participation from the whole community.”

The parade will feature groups from various elementary schools, civic and social organizations and churches, she said. LeGree McCamey, a city councilman and minister of music at First Baptist Church on Fannin Street, is slated to be the parade’s grand marshal this year.

With this year’s theme of “Lift Every Voice,” McCamey seemed an appropriate choice as grand marshal, Pittman said.

“LeGree is a very awesome person,” she said. “He’s intelligent and very talented. He could have been somewhere else in show business but he chose to stay and work with his church.”

McCamey, a LaGrange native, was chosen as grand marshal by a committee of seven parade organizers.

He said he was honored — even a bit humbled — when asked to lead the parade.

“In all honestly, I feel like there are so many more people that are worthy, so I count it as an honor,” he said. “Being a singer, I said OK they told me the theme.”

The theme is named in honor of a hymn and poem written by two African-American brothers and was first performed in 1900 at a segregated school during a memorial of President Abraham Lincoln. In 1919, the NAACP named it “The Negro National Anthem,” according to Time magazine.

As a minister of music, McCamey said music has the power to bring people together, much like the slain Civil Rights leader the parade memorializes.

“In music, everyone can do something,” he said.”They might not be a singer, but they can hit a tambourine or play sticks or hit wood blocks. We need to be engaging each person not only as as a spectator but a participant.

“Dr. King’s legacy was giving his life for equality and justice for all mankind,” McCamey said. “The parade itself should be a hodgepodge of the city. Everyone in the community is reaping benefits from the legacy of Dr. King.”

McCamey, like Pittman, said he hopes to see a wide variety of people at the parade.

“I would love to see our community embrace the parade from the perspective that we’re embracing and moving toward unity,” he said. “We should be forgetting those things that divide us and focusing on the things that united us. We’re much stronger if we’re united.”