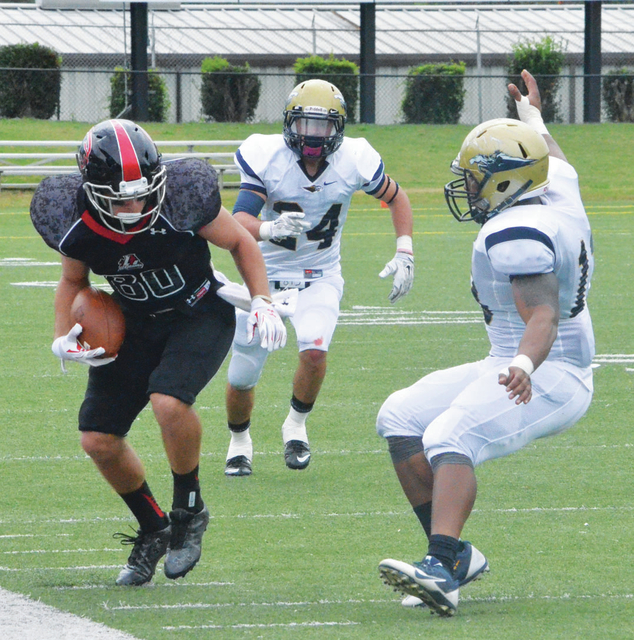 LaGrange College’s Justyn Olson gets a shot away during the first half. Olson led the Panthers with 16 points. Kevin Eckleberry | Daily News

http://lagrangenews.com/wp-content/uploads/sites/37/2016/01/web1_LC6.jpgLaGrange College’s Justyn Olson gets a shot away during the first half. Olson led the Panthers with 16 points. Kevin Eckleberry | Daily News

LAGRANGE – Once they started rolling, there was no looking back.

The LaGrange College Panthers were a little slow getting out of the starting blocks during Monday’s game against Millsaps, and seven minutes into the first half they were behind by 11 points.

Beginning with a Braxton Ford 3-pointer, though, the Panthers put the accelerator down, and they didn’t let up for the rest of the first half.

By the time the first half came to a close, the Panthers were ahead 49-31.

With head coach Kendal Wallace clearing the bench in the second half, the Panthers couldn’t maintain that torrid offensive pace, but it didn’t matter.

“We did a great job of not turning the ball over and assisting on made field goals,” Wallace said. “We were lucky to catch Millsaps coming off an overtime loss the day before. They are well coached and play hard, I just think they were a little tired. The guys followed our game plan and executed when we needed to early.”

In what has been a recurring theme of late, LaGrange High graduate Justyn Olson led the Panthers in scoring.

Olson finished with 16 points, and he was the team’s leading scorer for the third consecutive game.

Forward Drew Vanderbrook knocked down three 3-pointers and scored 11 points, and Alex Bonner had 10 points off the bench and led the way with six rebounds.

Senior Braxton Ford made three 3-pointers and scored nine points, and he played a major hand during the game-changing first-half run.

Senior guard Mark Wagner, the Panthers’ leading scorer for the season, only took seven shots and scored six points, but he contributed in other ways.

He did a nice job of handling the ball, and he had five rebounds, two steals, and two assists.

Mike White added eight points, and he was 4-of-4 from the free-throw line.

The Panthers were trailing 20-11 when Ford knocked down a 3-pointer, and with 12:20 left in the first half, it was a six-point game.

After Duncan Parker made a layup to get the Panthers with four, Ford made another 3-pointer with 11:09 remaining in the half to make it a 20-19 game.

After a steal by Parker, Ford got the ball, and he let loose again from long range, and his third 3-pointer in a little more than two minutes gave the Panthers a 22-20 lead.

Millsaps then went on an 8-2 run to get within five, but Olson made a layup and the Panthers were off and running again.

Olson made a jump shot with 19 seconds left in the half to give the Panthers their biggest left of the game of 18 points.

LaGrange College led by as many as 26 points in the second half on the way to the 22-point victory.

All 16 LaGrange College players got on the court, and 12 of them scored.

LaGrange College will put its 2-0 USA South record on the line when it visits the rival Maryville Scots on Saturday.