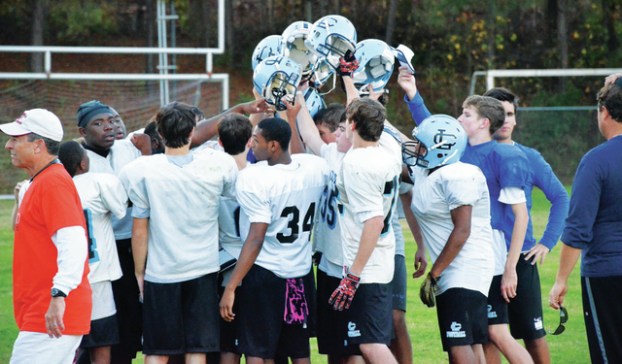 The LaGrange Academy Warriors will return from their holiday break with a game at Heritage today. Kevin Eckleberry | Daily News

http://lagrangenews.com/wp-content/uploads/sites/37/2016/01/web1_LGA1.jpgThe LaGrange Academy Warriors will return from their holiday break with a game at Heritage today. Kevin Eckleberry | Daily News

The all-important region schedule will get under way this week for the boys’ and girls’ teams from Callaway, LaGrange and Troup.

Also this week, the teams from LaGrange Academy and Lafayette Christian will return from long breaks.

For LaGrange and Troup, the region schedule will get started today, while Callaway’s teams will make their region debuts on Friday.

Here’s a look at where the local teams stand heading into the region schedule:

The Grangers embark on their Region 1-AAAAA schedule flying high.

The Grangers began the season with eight consecutive wins, and they’ll carry an 11-2 record into today’s home game against Hardaway.

In their most recent outing, the Grangers outlasted Lithia Springs 68-67 in their final game in the LaGrange Toyota Basketball Classic.

Senior Derieko Smith, showing off the explosiveness that helped him become the Region 1-AAAAA player of the year last season, scored 28 points against Lithia Springs.

LaGrange, which won the region-tournament championship last season on the way to an appearance in the elite eight of the state tournament, will play three region games this week, beginning with today’s game with Hardaway.

On Friday, LaGrange will play Columbus High before facing Carver on Saturday.

The Lady Grangers had dropped three straight games before beating Grady 47-45 in overtime on Dec. 22.

LaGrange rallied from four points down in the final minute of regulation to pull even before winning in the extra period.

Post player Shania Woodard had 29 points in that game for LaGrange.

Through the first 10 games, Woodard along with guards Chnaireia Strozier and Aryan Dozier have been LaGrange’s leading scorers.

The Lady Tigers tuned up for their region schedule by going 2-1 in a tournament in Meriwether County last week.

Troup reached the championship game before falling to Greenforest 40-32.

The Lady Tigers have a winning record at 6-5, but they’re a play here or there from having a bunch more wins.

“We were in every game,” Troup head coach Carla Thornton said. “You hate to have moral victories, but all the games we lost we could have won, so that’s the positive thing about it.”

Kwyneshia Spence and Shaqoya Gilbert have both been explosive scorers this season.

In the Meriwether tournament, Gilbert had 22 points in a win over Manchester, and Spence had 16 points in the championship game against Greenforest.

Troup’s boys’ team is 5-5 after going 1-1 in the Meriwether tournament.

The Tigers were hit hard by graduation following the 2014-2015 season, but they have stood tall this season despite having an inexperienced roster.

Among the regular contributors are five freshmen or sophomores, including sophomore guard Jarrious Jefferson, who has often been the team’s leading scorer.

The Tigers aren’t a prolific scoring team, but they have found success by playing solid defense and doing a nice job of keeping the pace to their liking.

“We feel like this team is willing to be coachable,” Troup head coach Paul Brewer said after a close loss to a talented Callaway team. “I think offensively we’re a little bit limited right now in what we can do, but, who cares? Come out and win a game, and compete. The beauty of basketball is you can win a game 100 different ways. You have to be willing to buy into a particular style.”

Callaway’s teams will have one final non-region test before making the transition to Region 5-AAA play.

Callaway will be on the road against Lanett today before visiting Central-Carroll on Friday in the region opener.

The Cavaliers are 5-2, and they won at Harris County on Saturday for their third straight win.

Before turning their attention to the region schedule, the Cavaliers will take on an always tough Lanett team.

Lanett, which is unbeaten at home, brings an impressive 12-4 record into today’s game.

The Cavaliers are an experienced, talented team that will be looking to win a fourth consecutive region championship under veteran head coach Terry Hayes.

The Lady Cavaliers fell to 2-5 with Saturday’s loss at Harris County, and they’ll look to get a win over Lanett today to carry some momentum into Friday’s game at Central-Carroll.

Callaway’s teams will play their first region home games on Saturday against Cedartown.

It’s been nearly three weeks since the LaGrange Academy teams played a game, and they’ll return from their break with two road games this week.

The Warriors are having a successful season.

Even though they lost to Heritage in their most recent game, the Warriors are 7-3, and they’ve played a challenging schedule.

“We’ve played 10 games, and it’s been a grind,” LaGrange Academy head coach Britt Gaylor said. “We wanted to schedule tough teams early and learn about ourselves.”

The Lady Warriors have struggled a bit this season, which isn’t too surprising considering every starter from last year’s team that won a region title and reached the second round of the state tournament graduated.

The good news is head coach Mike Petite believes the schedule the rest of the way will be more favorable for the Lady Warriors.

Lafayette Christian’s boys’ and girls’ teams, who haven’t played since Dec. 14, will return to the court today for region home games against Ballard Christian.

The Cougars are off to a terrific start with a 5-0 record, and in their most recent game, Marcus Mobley had a huge game with 40 points and 16 rebounds in a road win over Arlington Christian.

Lafayette Christian’s teams will have road games against Skipstone Academy on Thursday and Central Christian on Friday.

Callaway returns from break with 84-76 win By Kevin Eckleberry keckleberry@civitasmedia.com Callaway’s Quantrez Cooper goes to the basket during the... read more