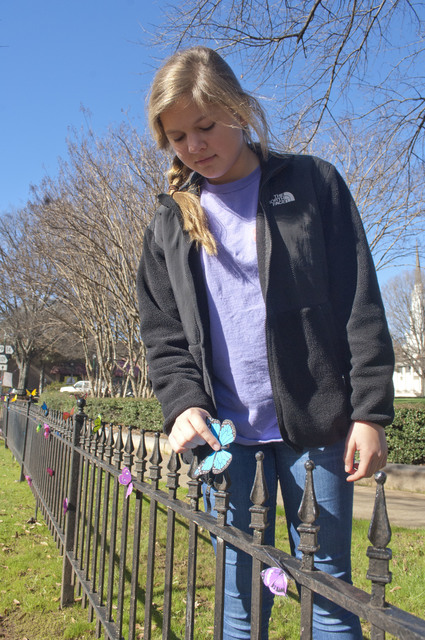 Hayleigh Seabaugh, a cast member of the Lafayette Theatre Academy’s performance of ‘I Never Saw Another Butterfly,’ places a plastic butterfly on Lafayette Square on Tuesday.

http://lagrangenews.com/wp-content/uploads/sites/37/2016/01/web1_ButterfliesWEB.jpgHayleigh Seabaugh, a cast member of the Lafayette Theatre Academy’s performance of ‘I Never Saw Another Butterfly,’ places a plastic butterfly on Lafayette Square on Tuesday.

LaGRANGE — Hundreds of plastic butterflies adorn Lafayette Square this week in remembrance of child victims of the Holocaust.

The display, carefully placed by volunteers from the Lafayette Theatre Academy in conjunction with their upcoming performance of “I Never Saw Another Butterfly,” commemorates the 15,000 children who died at the Terezín concentration camp in what is today the Czech Republic, said Amy McDow, the performance’s artistic director.

Of the 1,000 colorful butterflies placed by volunteers, 10 are a simple, undecorated white to show the scale of the estimated 1 percent of children who survived the camp.

“For me, it’s a visual representation of the difference between those who went in and those who survived,” McDow said. “It’s to help illustrate the legacy left by those who did not survive.”

The upcoming show, which opens Thursday and runs through Saturday, tells the story of prominent artists, writers, musicians, scientists and scholars who were held in the concentration camp and worked diligently to provide education and cultural life for the children there, McDow said.

Much of the dialogue of the script comes from the poetry, drawings, paintings and diaries that were buried by adults before their deportation.

The cast of 37 has been rehearsing for about two months, McDow said, and many of the children in the show create actual artwork during the performance. During the rehearsals, art stations were also set up for the young actors to create their own art.

“We had craft stations because that’s what the kids in the actual camp relied on for hope and support,” McDow said. “It can be a release and a way to express ourselves.”

When the actual concentration camp was in operation in the Czech Republic, the Nazis used it as a propaganda model to try and convince the world they were treating prisoners humanely, explained Audrey Rushan, the performance’s stage manager.

At one point, the Red Cross toured the facility and were even shown an opera performance put together by the children. After the Red Cross inspection, many of those children were deported to their deaths, Rushan added.

“It’s twisted,” she said of the Nazis’ actions.

Although the show’s material is decidedly tragic, the cast and crew have tried to stay positive during the rehearsals and McDow said the creation of art has helped the cast connect and understand the Holocaust through a new lens.

“It’s been interesting to watch the children learn,” McDow said.

Performances of “I Never Saw Another Butterfly” are Thursday through Saturday at 7 p.m. with an additional matinee Saturday at 2 p.m at the Lafayette Society for Performing Arts Black Box Theater, 214 Bull St. Tickets are $15 for adults, $12 for students and can be purchased at www.lsparts.org or by calling 706-882-9909.

Following each production, the cast will greet the audience to share their art and experiences with their guests.

Refreshments will be provided by The Medicine Cabinet Soda Shoppe. In a statement, the LSPA thanked the UPS Store on Commerce Avenue and Resilient Floor Covering Institute on Broad Street for their support.