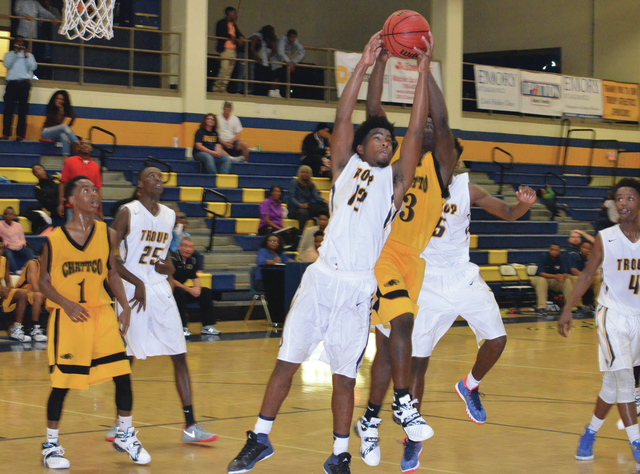 TYRONE – They made it interesting.

Trailing by nine points at the half, the Troup Lady Tigers nearly made it all the way back in Tuesday’s road game against Sandy Creek, but they ended up falling 50-46.

It was the Region 5-AAAA opener for the Lady Tigers, who fell to 6-6 overall.

In the first half, the Lady Tigers had a hard time getting the ball to fall through the basket, and they trailed 25-16 at the break.

“We had a ton of open looks in the first half, we just couldn’t make them,” Troup head coach Carla Thornton said.

The Lady Tigers began chipping away at their deficit in the second half, and late in the game they were right there.

Twice in the closing moments the Lady Tigers had the ball down by just two points, but they turned the ball over on both occasions, and it was the Lady Patriots hanging on for the home win.

“We were playing awful, but we were still in the game,” Thornton said. “As bad as we were playing, it was still doable. We came back and had a chance.”

Kwyneshia Spence and Shaqoya Gilbert each scored 11 points to lead Troup in scoring.

In Tuesday’s boys’ game, the Tigers went scoreless in the first quarter, but they were able to rebound and make a game of it, only to fall 55-47.

The Tigers trailed 14-0 after the first period, but they found their footing in the second quarter and outscored the Patriots 14-7 to make it a 21-14 game at the half.

The Tigers then outscored the Patriots 14-11 in the third period, and they were within four points as the final quarter began.

Sandy Creek outscored Troup 23-19 in the final period to secure the region win.

Troup’s teams will look to get back on track on Friday when they host region foe Woodward Academy.