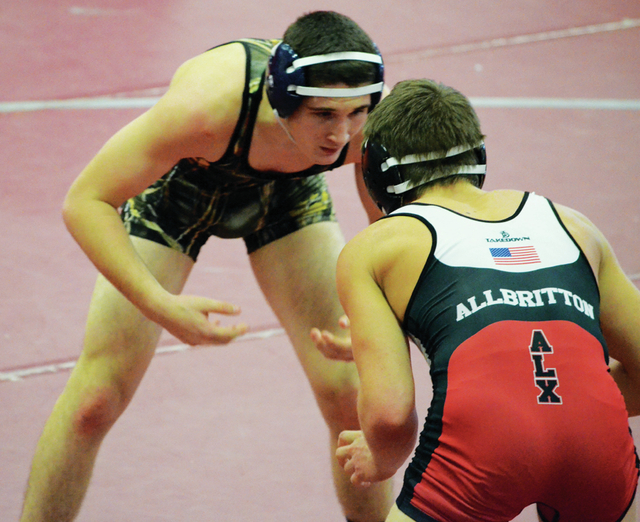 Troup’s Brantly Robinson wrestles while his coaches and teammates look on during a match earlier this season. Troup will compete in the Area 5-AAAA duals on Saturday at Woodward Academy. Kevin Eckleberry | Daily News

http://lagrangenews.com/wp-content/uploads/sites/37/2016/01/web1_troup12.jpgTroup’s Brantly Robinson wrestles while his coaches and teammates look on during a match earlier this season. Troup will compete in the Area 5-AAAA duals on Saturday at Woodward Academy. Kevin Eckleberry | Daily News

Troup’s Scott Hicks holds his opponent down during a match this season. Hicks will be in the lineup for the area duals on Saturday. Kevin Eckleberry | Daily News

http://lagrangenews.com/wp-content/uploads/sites/37/2016/01/web1_troup2-hicks.jpgTroup’s Scott Hicks holds his opponent down during a match this season. Hicks will be in the lineup for the area duals on Saturday. Kevin Eckleberry | Daily News

LAGRANGE – The future looks bright, and the present isn’t too shabby either.

When the Troup High wrestling team hits the mat for Saturday’s Area 5-AAAA duals, there will only be one senior in the lineup, and that’s heavyweight Hudson Newton.

Another senior, Hunter Wood, will soon return to the lineup after suffering an elbow injury earlier in the season.

Many of Troup’s top wrestlers are either freshmen or sophomores, and they have been performing at a high level throughout the season.

On Saturday at Woodward Academy, Troup will look to keep the good times rolling.

Troup will need to finish second or higher to secure one of the area’s two invitations to the state duals that will be held next week in Macon.

If the Tigers make it happen, they’ll do it without some key members of the lineup.

Among the missing wrestlers will be Wood, who has been out of action for more than a month after suffering an elbow injury in practice, and 220-pounder Colby Harry.

“With our team we had at the beginning of the season, we should have run through area,” Troup assistant coach Drew Garner said. “Now, several have fallen off. But we’ll do the best we can.”

The Tigers may be short-handed, but they’ll still bring a talented team to Woodward Academy.

Troup has faced a challenging schedule this season, and many of the wrestlers have thrived.

Before that, Troup was in a tournament at Whitewater High School, and Steven McClendon snared a first-place finish, and Robinson and Jeremiah McClendon each finished second.

At the Chattahoochee River Wrestling Association tournament, Troup had a tremendous showing, finishing second out of 14 teams.

Jeremiah McClendon had a first-place finish at that tournament, and Steven McClendon, Trey Harris and Byron Butts each finished second, while Upchurch, Scott Hicks, Robinson and Harry also placed.

A handful of Troup’s top wrestlers this season are freshmen, including Harry, Steven McClendon and Darius Hanson, who was off to an 11-1 start before he was injured.

“A lot of our freshmen have really stepped up and gotten better,” Garner said.

Other key members of the lineup are sophomores, including Seals, who Garner believes could compete for a state championship once he drops down to 120 pounds.

Seals has been wrestling at 132 pounds most of the season, and Garner said he’ll be at 120 pounds by the traditional area tournament.

“He was one match away from placing (at state) last year, and 120 is wide open this year,” Garner said. “All the state contenders have dropped to 113.”

Other sophomores who have excelled for Troup include Robinson, Upchurch and Hicks.

Hicks was a first-year wrestler as a freshman, and Garner said he has made tremendous progress.

“I think he’s third on the team with the most team points,” Garner said. “Last year was his first year wrestling, and he was JV. He’s a first-year varsity guy. He’s a very, very intelligent kid. He adapts very quickly.”

Some other wrestlers who have contributed this season are Quenton Kersey, Colton Greathouse and Pearson Strickland.

One of Troup’s most accomplished wrestlers is Newton, who finished fifth at last year’s state meet.

On Saturday, Troup will take on Carrollton in its first match before facing Whitewater and Woodward Academy.

Whitewater, a senior-dominated squad, is the team to beat, and Garner feels Troup and Carrollton are fairly evenly-matched.

If Troup beats Carrollton, it will most likely end up in the state duals, making Saturday’s match between those two teams arguably the most important one.

“It’ll be decided by one, two matches,” Garner said. “With Hunter out and now Colby, it’ll be tough.”

Garner said his message to the wrestlers is to fight for every point.

“That’s something we’ve been preaching all week,” Garner said. “You put them on their back, you stick them. You get on your back, you fight with everything you’ve got.”

Whatever happens on Saturday, Troup still has a lot of season left.

On Jan. 20, Troup will host LaGrange and Callaway in the county championship, and the traditional area meet will be on Jan. 22 where the wrestlers will have a chance to qualify for state as individuals.

The state sectional begins on Feb. 5, and the state finals get started on Feb. 12.