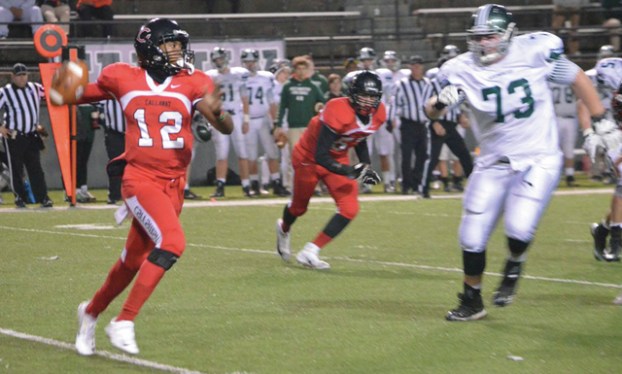 HOGANSVILLE – The Callaway Cavaliers made it through the 2014-2015 season without losing a region game, either during the regular season or the region tournament.

The Cavaliers will try to repeat that success this season.

Callaway (5-3 overall) will begin its Region 5-AAA schedule with a road game against Central-Carroll today before hosting Cedartown on Saturday.

Also this weekend, the basketball teams from LaGrange and Troup will continue their region schedules, and LaGrange Academy and Lafayette Christian will also be in action.

The Central-Carroll Lions (7-5 overall) are off to a nice start, and they thumped Haralson County 63-40 earlier this week in their region opener.

On Saturday, Callaway will host a 3-7 Cedartown team that carries a four-game losing streak into today’s region opener against Pepperell.

The Cavaliers are looking to continue their remarkable run of success in region play.

Last season, the Cavaliers went 10-0 in the region in the regular season, and they won all three of their games in the region tournament before making it to the elite eight in the state tournament.

During the 2013-2014 season, the Cavaliers finished second in Region 4-AAA during the regular season, but they won the region tournament before making it to the final four of the state tournament.

In the 2012-2013 season, Callaway only lost one region game during the regular season, and it won the region tournament as well.

This season’s Callaway team features a number of players who have had a lot to do with the success in past years, including senior Dre Martin, who has been starting since he was a freshman.

Seniors Joe Brown and Quantrez Cooper and junior Braylon Sanders have also been through the region battles plenty of times.

The Callaway Lady Cavaliers (2-6) will look to get their region schedule started with a win today against a Central-Carroll team that has struggled to a 2-10 record.

The LaGrange Grangers (11-2 overall), who began their Region 1-AAAAA schedule with a 73-48 win over Hardaway on Tuesday, will be in Columbus this weekend for a pair of region games.

First up will be today’s game against the Columbus Blue Devils (5-7), who are 1-1 in the region.

On Saturday, LaGrange will have a region showdown with a strong Carver team.

The Lady Grangers (6-4), who are 1-0 in the region after beating Hardaway 64-56, face two big-time challenges this weekend.

First up will be today’s game against the Columbus Lady Blue Devils (11-1 overall), who are 1-1 in the region.

Columbus’ lone region loss came against Carver (11-2), which will play LaGrange on Saturday.

Troup’s teams, who both lost their Region 5-AAAA openers at Sandy Creek on Tuesday, will look to break through for their first region wins today at home against Woodward Academy.

Woodward Academy’s boys’ team, which is 7-6 overall, kicked off its region schedule with a 65-52 win over Whitewater on Tuesday.

Woodward Academy’s girls’ team, which is 3-10, dropped its region opener against Whitewater.

In GISA basketball, LaGrange Academy’s teams will be on the road today for region games against Brandon Hall.

LaGrange has no trouble with Hardaway By Kevin Eckleberry keckleberry@civitasmedia.com LaGrange’s Derieko Smith gets to the basket during the second... read more