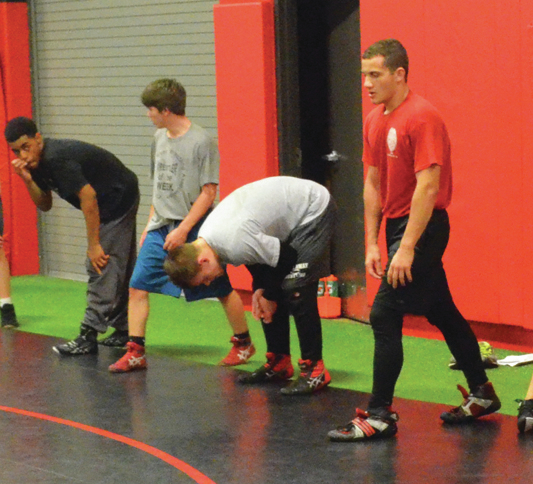 Callaway’s Gabriel Liranzo and his teammates run toward the end of practice a few weeks ago. Liranzo is a senior wrestler for the Cavaliers. Kevin Eckleberry | Daily News

http://lagrangenews.com/wp-content/uploads/sites/37/2016/01/web1_liranzo.jpgCallaway’s Gabriel Liranzo and his teammates run toward the end of practice a few weeks ago. Liranzo is a senior wrestler for the Cavaliers. Kevin Eckleberry | Daily News

HOGANSVILLE – Callaway High wrestler Gabriel Liranzo may not win every time he steps onto the mat.

What Liranzo is confident of, though, is that he’ll be as physically prepared as anyone he faces to handle those six grueling minutes during a match.

Liranzo, a senior, is part of the Callaway wrestling team that will participate in the Area 5-AAA duals on Saturday at Pepperell High School in Rome.

Callaway will be looking to finish among the top two teams to secure a spot in the state duals next week.

Part of the reason Liranzo is so confident in his ability to handle the rigors of the sport is because he also runs cross country.

“Cross country without a doubt helped,” Liranzo said following a recent practice session. “I love running cross country. It got me in shape for so many things.”

Liranzo didn’t wrestle during his junior season, but he continued to run cross country.

When he decided to rejoin the wrestling team for his senior season, he already had the stamina thanks to his cross-country training.

“Most people when they wrestle, they get real tired by like round two, and they’re exhausted, they can’t do anything,” Liranzo said. “Me, by the end of round three, by the time it’s over, I’m still calm. I still have a level head. I love to run, and I’m so glad I did cross country before I did this.”

Liranzo wrestled from his seventh-grade year through his sophomore season before stepping away from the sport.

Liranzo had plenty on his plate.

In addition to running cross country, he is also extremely active in Callaway’s Junior ROTC program, so it’s not like he didn’t have enough to fill his time.

After meeting with new head coach Josh Ghobadpoor, though, Liranzo decided to return to the sport.

It helped that Ghobadpoor also coached cross country, so Liranzo was able to get to know him.

“If it wasn’t for coach Ghobadpoor, I wouldn’t even be wrestling,” Liranzo said. “He has made that much of an impact. He is definitely one of the best coaches I have ever had.”

When Ghobadpoor became the wrestling coach, he spent plenty of time recruiting, and he did his best to convince Liranzo to rejoin the team.

“Coach Ghobadpoor comes in, and becomes the cross-country coach and I get to know him, and he convinces me to go out and wrestle,” Liranzo said. “If it was anyone else coaching, I wouldn’t even consider it.”

Liranzo has been a key part of the lineup this season, and he had a sixth-place finish at the Chattahoochee River Wrestling Association tournament in December.

He joined that team as a sophomore, and he made tremendous strides in the three years he participated in the sport.

“I started running cross country in 10th grade,” Liranzo said. “My freshman year when I first came here I was in ROTC, we had to run the mile, and my first time running it, I did it in like 8:30. Now that I’m a senior and I’ve run cross country for three years, it’s down to like a 5:55. Cross country played a gigantic role in getting me to where I am today. That was the first sport that taught me more than anything if you work hard, you get stuff out of it.”

Liranzo said he was able to achieve a major personal goal during his senior season as he posted a time of less than 20 minutes during a cross-country race, which is 3.1 miles long.

“When I first started running my 10th-grade year, I was running 24, 25-minute (races),” Liranzo said. “Over the summer, I said I wanted to get good at this, to get really good at this sport. Over the summer I trained, and I trained, and I trained. I ran at least five, six days a week. Starting the next year, I was running 21 minutes. My entire goal was to get under 20 minutes, and this year I finally did. I ran 19:26.”

Now, that diligence is paying off in a different sport.