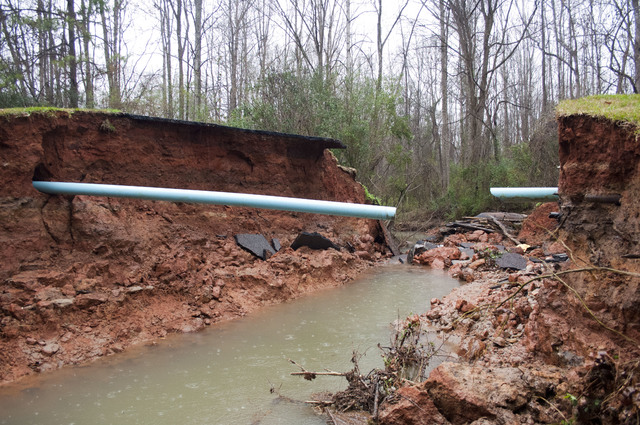 A portion of Plymouth Drive in the Heritage Hills neighborhood was completely washed out during flooding Dec. 24.

http://lagrangenews.com/wp-content/uploads/sites/37/2016/01/web1_1230RoadWEB1.jpgA portion of Plymouth Drive in the Heritage Hills neighborhood was completely washed out during flooding Dec. 24.

LaGRANGE — Like the waters that caused it, the cost of recent flooding in Troup County keeps rising.

That figure is up from a $960,000 estimate reported to county commissioners Tuesday morning.

The damage was found on Towns Road at Shoal Creek and Leathea Drive at a tributary of Pepperell Creek. At both sites, drainpipes that pass beneath the roads were discovered to have extensive rust damage, Emery said.

“A metal pipe has deteriorated because of corrosion and abrasion,” Emery said of the Towns Road location. “It hasn’t completely failed, but we’ve got some failures on the upstream and downstream end where the pipe has rusted to where it’s starting to split. It hasn’t started to collapse under the road yet.”

Going forward, Emery said he’ll begin designing a replacement structure for both locations. It is unclear if emergency grant funds will cover the cost of the repairs of the drain pipes. Emery indicated the Leathea Drive location may not be eligible for the grant.

So far, Troup County officials have requested nearly $900,000 in emergency grant funds from the state and a decision on whether or not that money will be allocated could come as early as today.

The county will have to provide a 30 percent matching grant, which can be made in in-kind funding such as labor or materials.

“Road crews are making a tremendous amount of progress every day,” he said. “They’re out working hard every day. I definitely don’t want people to think we’re not trying. We’re making good progress.”

Of the 44 locations identified to have flooded, 13 — 30 percent — have been inspected and are completely open today. An additional 11 roads remain closed or limited to one lane.

For up-to-date information on road closures and other disaster response resources, visit www.lagrangenews.com/flood or follow the Troup County Sheriff’s Office on Facebook.