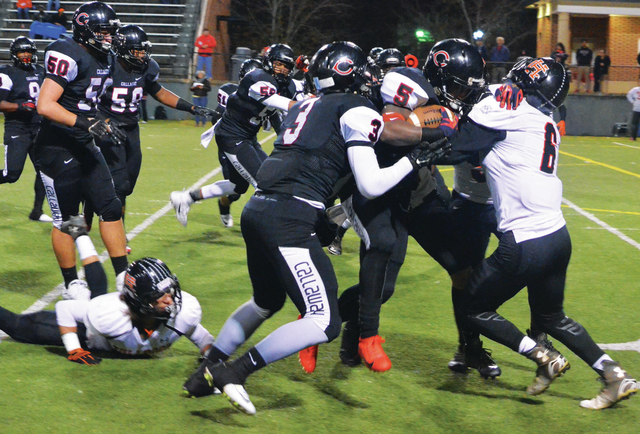 Callaway’s Ernest Patillo goes up for a dunk during the first half of Saturday’s win over Cedartown. Kevin Eckleberry | Daily News

http://lagrangenews.com/wp-content/uploads/sites/37/2016/01/web1_CHS7.jpgCallaway’s Ernest Patillo goes up for a dunk during the first half of Saturday’s win over Cedartown. Kevin Eckleberry | Daily News

Callaway’s Andrew Kim handles the ball during the first half of Saturday’s Region 5-AAA victory. Callaway is 2-0 in the region. Kevin Eckleberry | Daily News

http://lagrangenews.com/wp-content/uploads/sites/37/2016/01/web1_CHS9-13.jpgCallaway’s Andrew Kim handles the ball during the first half of Saturday’s Region 5-AAA victory. Callaway is 2-0 in the region. Kevin Eckleberry | Daily News

The Callaway Cavaliers opened their Region 5-AAA schedule with an 84-76 win over the Central-Carroll Lions on Friday, and head coach Terry Hayes felt things were somewhat lacking on the defensive end.

So a day later when the Cavaliers took on the Cedartown Bulldogs, Hayes stressed to his players the importance of delivering a lock-down defensive effort.

The players responded by holding the Bulldogs to 22 points through the first three periods, and the Cavaliers rolled to a 66-33 victory to improve to 2-0 in region play.

“We played a lot better defense tonight than we did last night,” Hayes said. “Tonight, we got a lot of steals like we’re supposed to do. That led to points.”

There wasn’t a whole lot of suspense.

The Cavaliers surged to an 18-2 lead, and while their advantage did shrink to eight points early in the second quarter, they were ahead 38-16 at the half.

The Cavaliers continued to pull away in the second half, and Hayes was able to empty his bench and get everyone some playing time.

All 12 players who were dressed on Saturday got on the floor, and eight of them scored.

“It’s valuable for my younger guys (to get playing time),” Hayes said. “I’m losing a butt-load of seniors. The more time they get, the better off we’ll be in the future.”

Dre Martin paced the Cavaliers with 18 points, and he did a lot of his damage driving to the basket, and he ended up shooting nine free throws.

“Dre took the ball to the basket, which I like him to do,” Hayes said.

Braylon Sanders showed off his outside shooting touch in the first half by making five 3-pointers, and he finished with 16 points.

Senior post player Joe Brown added 13 points, and Ernest Patillo scored 10 points, and he had a highlight-reel type dunk in the first half.

“I thought my bigs did a good job tonight boxing out, rebounding, and stealing the ball,” Hayes said.

Sanders made a 3-pointer to cap a 7-0 run to begin the game, and by the time Sanders hit another one from long distance, the Cavaliers led 18-2.

The Bulldogs showed some fight.

They scored the final six points of the first quarter to cut their deficit to 18-8, and they made the first basket of the second period to get within eight.

The Cavaliers responded with an 11-0 run, and they didn’t look back.

Patillo began the run with a basket with 6:56 left in the half, and when Sanders made his third 3-pointer of the half, the Cavaliers led 29-10.

Sanders made two more 3-pointers in the closing moments of the first half, and the Cavaliers enjoyed a 22-point cushion at the break.

Any hope the Bulldogs had of making a comeback was dashed in the third quarter when they were outscored 19-6.

The Cavaliers will look to move to 3-0 in the region when they visit Haralson County on Tuesday, and they’ll be back home on Friday to face Pepperell.