Grangers are heading to Macon 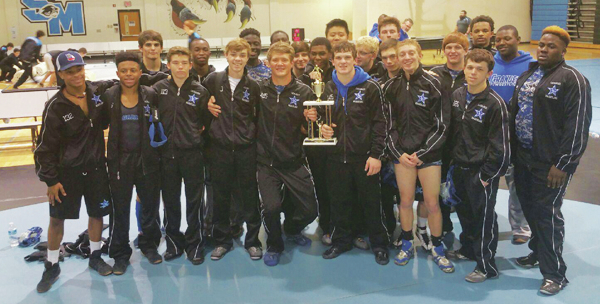 The LaGrange High wrestling team finished second at the area duals on Saturday to earn a spot in the state duals. Contributed photo

http://lagrangenews.com/wp-content/uploads/sites/37/2016/01/web1_LHS-wrsetle.jpgThe LaGrange High wrestling team finished second at the area duals on Saturday to earn a spot in the state duals. Contributed photo

The LaGrange Grangers are going to state.

LaGrange High’s wrestling team finished second in the Area 1-AAAAA duals on Saturday to earn an invitation to the state duals in Macon.

LaGrange beat Northgate 49-24 to reach the championship match of the area duals and secure a spot at state.

In the title match, it was Starr’s Mill coming away with a hard-fought 43-30 win.

“I’m excited for the boys,” LaGrange head coach Scooter Weathers said. “The boys wrestled hard. They got after it. They never quit, and they fought.”

After easily dispatching McIntosh 58-24 in the day’s first match, LaGrange took on Northgate with a state spot on the line.

The Grangers won the first five matches to take control, and they never looked back on the way to the one-sided win.

Dakota Wilson, making his debut as a LaGrange wrestler after transferring from Troup, won his match by decision, and Matt Watford, Dominique Copeland and Dijon Hart also won their matches.

LaGrange then pushed Starr’s Mill to the limit before falling just short.

Wegienka got a pin for the Grangers in the final match, but they still needed three more points.

“It was a good match,” Weathers said. “They were disappointed, but the good thing is, we’re not done.”

LaGrange will face Jones County in its state opener on Thursday.