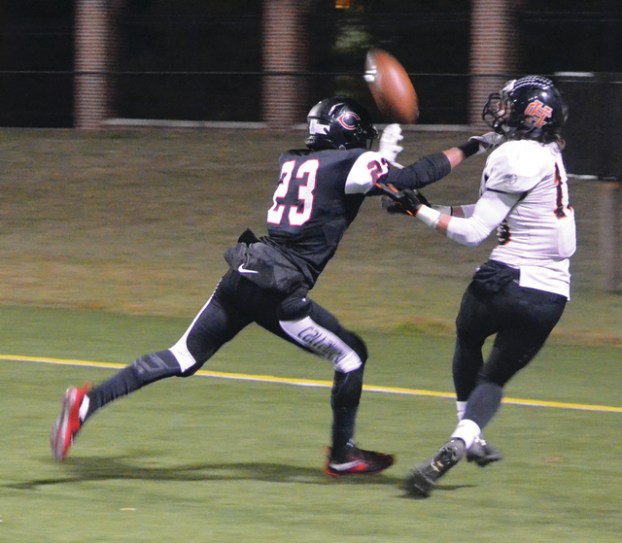 Callaway’s Haley Holliday and Kelly Carlisle defend during the second half of Saturday’s win over Cedartown. Callaway is 2-0 in Region 5-AAA. Kevin Eckleberry | Daily News

http://lagrangenews.com/wp-content/uploads/sites/37/2016/01/web1_CHS31.jpgCallaway’s Haley Holliday and Kelly Carlisle defend during the second half of Saturday’s win over Cedartown. Callaway is 2-0 in Region 5-AAA. Kevin Eckleberry | Daily News

HOGANSVILLE – They’re perfect where it counts.

Facing a challenging non-region schedule, the Callaway Cavaliers were 2-6 after losing a road game to Lanett last week.

In their two Region 5-AAA games, though, the Lady Cavaliers are unbeaten.

After getting a big road win over Central-Carroll on Friday, Callaway returned home on Saturday and overwhelmed Cedartown 45-29.

“First of all, I think we know how important the region games are, so I think it meant a lot more, they were a lot more focused and locked in,” Callaway head coach Deyano Martin said.

Alexus Scott had the hot hand for Callaway in Saturday’s game with 15 points, and Tanesha Johnson scored eight points in her second game of the season.

Johnson, a senior guard who was one of Callaway’s top players last season, missed the first eight games of the season, and she made her debut in Friday’s game against Central-Carroll.

“I think the addition of having Tanesha out there, that gave them that extra boost of confidence,” Martin said. “And I think the team is starting to learn what to do.”

Eleven players saw time on the court for Callaway, and nine of them scored.

“We’re going deep,” Martin said. “Everybody is getting a chance to play.”

While Johnson was unable to play in the first eight games, there were some injuries to some other key players, which opened up some minutes for some other members of the team.

“We’ve had a couple of girls injured,” Martin said. “So the other girls have been having to play a lot of minutes, so they’ve got experience now. So it’s a big help.”

Even if everybody had been available since the first game, Martin said he would have still made sure to use all of the players available.

There are a core group of players Martin knows he has to depend on, and he wants to make sure they’re always fresh at the end of a game.

“I think depth will help us a lot, being able to roll a lot of people in,” Martin said. “At the end of the game, we’ll be able to finish strong.”

The Lady Cavaliers were stingy on defense, holding the Lady Bulldogs to fewer than 10 points in all four quarters.

On offense, the Lady Cavaliers were consistent, scoring in double figures in all four periods.

Johnson scored five points and made a 3-pointer in the first quarter to help the Lady Cavaliers take an 11-6 lead.

Scott got hot in the second quarter and scored six points, and Callaway had a 22-12 lead at the half.

Ke Ke Talley hit a 3-pointer in the third period to help the Lady Cavaliers surge to a 35-20 lead, and they led by at least 13 points throughout the fourth quarter.

Callaway will face its biggest region test so far when it visits Haralson County on Tuesday.

Haralson County is 16-1 overall and 2-0 in the region, and it has won 16 consecutive games since a season-opening loss.

“When we play Haralson County, we’ll find out where we are,” Martin said.

Callaway will be back home on Friday for a region game against Pepperell.