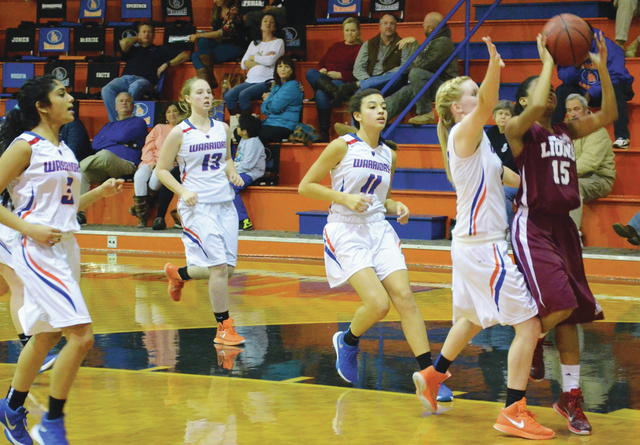 LaGrange Academy’s defenders chase down a Solid Rock player during the first half of Tuesday’s game. Kevin Eckleberry | Daily News

http://lagrangenews.com/wp-content/uploads/sites/37/2016/01/web1_LGA11.jpgLaGrange Academy’s defenders chase down a Solid Rock player during the first half of Tuesday’s game. Kevin Eckleberry | Daily News

LAGRANGE – Hoping to put together their first winning streak of the season, the LaGrange Academy Lady Warriors instead fell to visiting Solid Rock Academy 49-24 on Tuesday.

LaGrange Academy was coming off a victory over Brandon Hall on Friday, and head coach Mike Petite was hoping for a repeat performance in Tuesday’s game.

Henrietta Egbe proved hard to stop for Solid Rock, and she scored 19 points.

The Lady Warriors trailed 15-9 after the first quarter, and they were down 26-11 at the half.

Hoping to get hot and get back into the game in the third period, the Lady Warriors were instead outscored 10-7, and they trailed by 18 points as the final quarter began.

LaGrange Academy was limited to four points in the final quarter, with Modi making a pair of baskets.