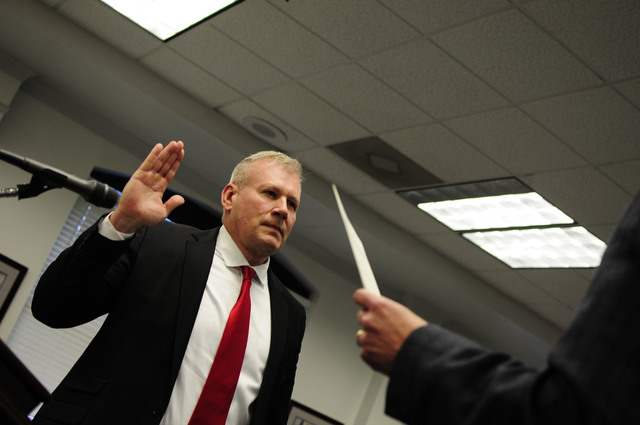 LaGRANGE — City Council’s newest member said he was thankful for an opportunity to serve the city after he was sworn in Tuesday.

“I would like to thank the citizens of LaGrange who went to the polls and elected me to this office,” Mitchell said as he addressed attendees and fellow councilmen at the meeting. “I also want to thank Mr. (Bobby) Traylor for his years of service. I think he has done a good job for the city of LaGrange. I look forward to working with each and every one of you and hopefully making our city a better place to live for every person.”

Mitchell defeated Traylor, a 20-year councilman, for his seat in November.

Speaking with the Daily News after the meeting, Mitchell said he was “just glad to be here.” As the freshman on council, he felt he could bring a fresh perspective and his inquisitiveness to learn the operations of the city would help spur more dialogue in the council.

“There’ll be a lot of things that I won’t understand and I’ll have to ask a lot of questions to understand them, and I think that’s important to get this feedback from that city manager so that we do understand it,” Mitchell said. “So when I make a decision voting on something that I make the best decision I can for the people I represent. … I don’t want to be someone who says yes when they’re told to say yes.”

As a 30-year law enforcement veteran, Mitchell is used to getting calls at all hours. He said that being connected to his constituents through modern technology also gives him an advantage.

“I think with the technology that we have now — email, text — basically, I can be very accessible to the people of LaGrange,” Mitchell said. “I feel that is going to be an advantage over Mr. Traylor, that I’ve got that technology edge that he may have not possessed, but speed of communication is so important …”

Mitchell pointed out that he would need to work together with other councilmen in order to affect any changes.

“I’m not naive, and I know that you can’t get much done as a single person voting on the council. You need to have four votes to pretty much do anything,” he said. “So, I feel that listening to the other councilmen, working out problems together can go a long way. As far fresh face, fresh ideas — sometimes government needs that, that fresh face. … Somebody that’s not necessarily going with the flow.”

“I’m just glad to be a part of this council,” McCamey said. “I’ve enjoyed the past eight years and look forward to the next four years.”

After taking his oath, Edmondson looked to the future as he addressed attendees in the council chamber.

“Thank you for giving me this opportunity,” he said. “I want to say I enjoy doing what I do, I enjoy serving the people of LaGrange, because I feel as though we have a great city. It’s not perfect, but … I think that we can make it the very best we can. … I want to see other great things happen in the city of LaGrange, and we have some exciting things coming forth now.”