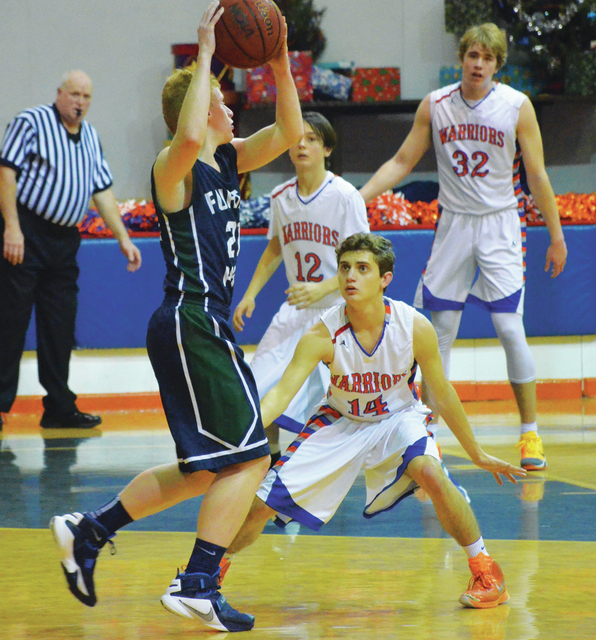 The Lafayette Christian School Cougars will look to move to 9-0 with a home win today. Kevin Eckleberry | Daily News

The LaGrange Academy Warriors will be at home today for a key region game against Solid Rock. Kevin Eckleberry | Daily News

LAGRANGE – It’s eight up and eight down for the Lafayette Christian School Cougars.

The Cougars will look to make it nine straight wins to begin the season when they host Holy Ground Baptist Academy today.

Also tonight, the LaGrange Academy basketball teams will be at home against Solid Rock Academy, and Callaway and Troup will both be on the road.

Callaway’s teams will visit Haralson County, and Troup will travel to Whitewater.

For the Lafayette Christian Cougars, it’s been smooth sailing so far.

They’ve won most of their games in blowout fashion, although they are coming off an 84-80 win over Central Christian last week.

The bad news for the opposition is that the Cougars are only getting better.

Many of the Cougars were on the football team that won a state championship, and they didn’t join the basketball team until a few days before the first game.

Now, those football players are fully in basketball mode as the Cougars look to continue their unbeaten season.

One of those football players is Jemi Reed, who scored 28 points in the win over Central Christian.

Another football player who has got his basketball legs is Antavius Sands, who had 23 points in the win over Central.

“I think we kind of got the football out of some of them,” said Lafayette Christian head coach Jarred Pike. “Jemi had 28 points last game against Central. And Antavius is coming on. We’re coming together as a team. The guys are getting to play together more. They didn’t have a lot of time (before the season).”

One player who has been there since the beginning is senior post player Marcus Mobley, who is having a sensational season.

In what has been a fairly typical game for Mobley, he had 18 points and eight rebounds against Central Christian, and in the game before that against Skipstone, he had 20 points and six rebounds.

During an earlier game against Skipstone, Mobley scored 30 points and had 12 rebounds.

Following a game this season, Mobley said his goal is to “try to dominate every game, play it like it’s your last.”

After today’s game, the Cougars will hit the road on Friday to take on a strong Heirway Christian team that is 12-3.

“That’ll be a challenge,” Pike said.

While winning games right now is nice, the Cougars are keeping their eye on the big picture.

Last season, the Cougars had a phenomenal regular season, but they lost twice in the region tournament, and were then beaten in the first round of the Georgia Independent Christian Athletic Association state tournament.

The good news is the Cougars have a bunch of players who know what it takes to win a title, albeit in a different sport.

The Warriors returned from their holiday break and lost to Heritage last week before outlasting Brandon Hall 52-49 on Friday in a GISA Region 1-AA game.

The Warriors (8-4) have two big home games coming up this week against a pair of teams expected to compete for the region championship.

The Lady Warriors (2-10), meanwhile, look to build on Friday’s win over Brandon Hall when they host Solid Rock tonight.

The Callaway Lady Cavaliers have a big road test tonight against Haralson County in a matchup of a pair of teams with perfect Region 5-AAA records.

Callaway (4-6 overall) is 2-0 in the region after wins over Central-Carroll and Cedartown.

Haralson County (16-1 overall) is also 2-0 in the region, and it has won 16 consecutive games since a season-opening loss.

“We’ll find out where we are,” Callaway head coach Deyano Martin said on the prospect of playing Haralson County.

The Cavaliers (7-3 overall) are also 2-0 in the region, and they shouldn’t have a whole lot of trouble with a Haralson County team that is 1-14.

The Rebels did, however, break their 14-game losing streak with a 45-34 win over Rockmart last week to improve to 1-1 in the region.

Callaway’s teams will be at home on Friday against Pepperell as they continue their region schedules.

Troup’s teams will be looking for their breakthrough region wins at Whitewater today.

The Lady Tigers (6-7 overall) are a few plays away from being 2-0 in the region, but instead they’re 0-2 after two close losses.

Troup lost to Sandy Creek 50-46 in its region opener before falling to Woodward Academy 55-52 on Friday.

The Tigers (5-7 overall) hung tough with Woodward Academy on Friday before losing 65-54 to fall to 0-2 in the region.

Troup’s teams will host region foe Fayette County on Friday before stepping out of the region for home games against Manchester on Saturday.