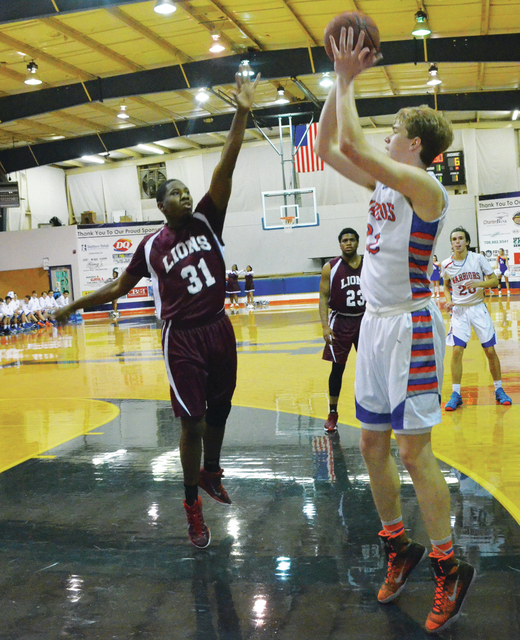 LaGrange Academy’s Will Trotter drives to the basket during the first half of Tuesday’s 57-47 victory over Solid Rock. Trotter led the Warriors with 17 points. Kevin Eckleberry | Daily News

http://lagrangenews.com/wp-content/uploads/sites/37/2016/01/web1_LGA5.jpgLaGrange Academy’s Will Trotter drives to the basket during the first half of Tuesday’s 57-47 victory over Solid Rock. Trotter led the Warriors with 17 points. Kevin Eckleberry | Daily News

LaGrange Academy’s Lincoln Anderson goes strong to the basket during the first half of Tuesday’s game. Kevin Eckleberry | Daily News

http://lagrangenews.com/wp-content/uploads/sites/37/2016/01/web1_LGA6.jpgLaGrange Academy’s Lincoln Anderson goes strong to the basket during the first half of Tuesday’s game. Kevin Eckleberry | Daily News

LaGrange Academy’s Whit Moreman gets a shot away during the first half. Moreman scored 12 points and helped control things in the paint. Kevin Eckleberry | Daily News

http://lagrangenews.com/wp-content/uploads/sites/37/2016/01/web1_LGA4.jpgLaGrange Academy’s Whit Moreman gets a shot away during the first half. Moreman scored 12 points and helped control things in the paint. Kevin Eckleberry | Daily News

LAGRANGE – It was a major test for the LaGrange Academy Warriors, and they passed it with flying colors.

In a showdown featuring two of the top teams in GISA Region 1-AA, the Warriors dominated the second half to beat visiting Solid Rock Academy 59-49.

The Warriors (9-4 overall) improved to 4-1 in the region heading into Friday’s home game against another one of the region’s top teams, Bethlehem Christian.

The Warriors trailed 30-28 at the half, but by the time the fourth quarter began, they had a 44-39 lead, and they maintained control the rest of the way.

It was a terrific defensive effort for the Warriors against a team that has been scoring points in bunches this season.

“We just dug in defensively,” LaGrange Academy head coach Britt Gaylor said. “I don’t think Solid Rock scored lower than 47 all year, so we did a great job.”

Will Trotter led LaGrange Academy’s offensive effort with 17 points, and he made three of his team’s seven 3-pointers.

The strength of Solid Rock’s team is its interior play, but Moreman and Anderson were up to the challenge in the paint.

They didn’t score as many points as they usually do, but they both had big days on the boards and on the defensive end.

“They were fantastic inside, especially defensively,” Gaylor said. “They were positioning themselves well, and they boxed out well. Whit had to have 15 to 20 rebounds. That was a big performance from him.”

Heath hit a 3-pointer with four seconds left in the first quarter to pull the Warriors even, and the home team scored the first five points of the second period to go up 18-13.

With Moreman relegated to the bench with foul issues, though, Solid Rock was able to take a 30-28 lead at the half.

“Whit was in foul trouble, and we hung tight with them,” Gaylor said. “We’re probably up seven with Whit in there.”

The Warriors took control in the third quarter.

Trotter and Heath combined to hit three 3-pointers in the third period, and LaGrange Academy outscored Solid Rock 16-9 to take a five-point lead.

“We didn’t have any silly turnovers. We took care of the ball (in the second half),” Gaylor said. “We got the shots we wanted. And everybody started playing with confidence.”

Moreman said the Warriors have had some second-half letdowns this season, and that the players were committed to not letting that happen again.

“Really we just came out with energy,” Moreman said. “In the past, we came out slow and that ended up hurting us. We’d have to fight back.”

LaGrange Academy kept it going in the fourth quarter, outscoring Solid Rock 13-10 to earn the win.

Trotter hit another 3-pointer in the final period and was 3-of-4 from the free-throw line to help the Warriors maintain their lead.

Trotter, Heath and Nick Keating each hit 3-pointers for the Warriors, and that provides a nice complement to the inside scoring of Moreman and Anderson.

“When we’re hitting our threes, it’s changing the game,” Trotter said. “We’re not only threatening inside, but outside as well.”

“He took care of the ball,” Gaylor said. “All of our guards did, and that was big. Will is that player who can get going for us.”