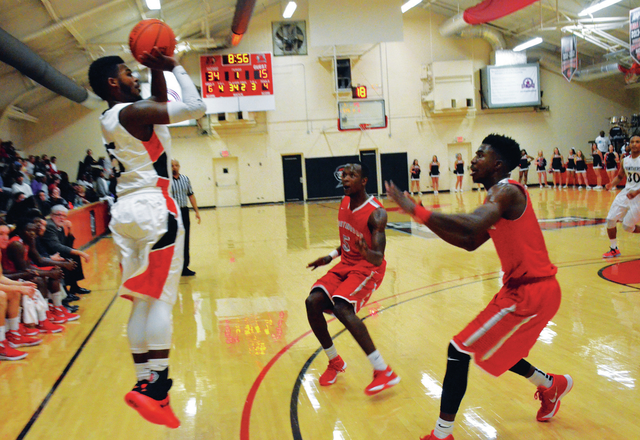 LaGrange College’s Jacob Gaetanos gets a shot away during the first half of Wednesday’s 100-67 victory over Huntingdon. Gaetanos made one of the Panthers’ 16 3-pointers. Kevin Eckleberry | Daily News

http://lagrangenews.com/wp-content/uploads/sites/37/2016/01/web1_LC61.jpgLaGrange College’s Jacob Gaetanos gets a shot away during the first half of Wednesday’s 100-67 victory over Huntingdon. Gaetanos made one of the Panthers’ 16 3-pointers. Kevin Eckleberry | Daily News

LaGrange College’s Drew Vanderbrook gets to the basket during the first half. Vanderbrook scored 27 points, and he made seven 3-pointers. Kevin Eckleberry | Daily News

http://lagrangenews.com/wp-content/uploads/sites/37/2016/01/web1_LC111.jpgLaGrange College’s Drew Vanderbrook gets to the basket during the first half. Vanderbrook scored 27 points, and he made seven 3-pointers. Kevin Eckleberry | Daily News

LaGrange College’s Justyn Olson puts up a shot during the first half. Olson was second on the team with 14 points. Kevin Eckleberry | Daily News

http://lagrangenews.com/wp-content/uploads/sites/37/2016/01/web1_LC8.jpgLaGrange College’s Justyn Olson puts up a shot during the first half. Olson was second on the team with 14 points. Kevin Eckleberry | Daily News

LAGRANGE – They ran ‘em right out of the gym.

The LaGrange College Panthers had everything working offensively in Wednesday night’s USA South showdown against the Huntingdon Hawks, and they ended up reaching the century mark in points for the third time this season on the way to a 100-67 victory.

The Panthers, who were coming off a road loss to the Maryville Scots on Saturday, ran their sterling overall record to 11-3, and they’re 3-1 in conference play.

The Panthers had a terrific shooting night.

They made 53 percent of their shots from the field, and they knocked down 16-of-33 attempts from 3-point range.

Sixteen LaGrange College players got some time on the court, and all but one of them scored, including Drew Vanderbrook, who led all scorers with 27 points while making 7-of-10 of his 3-point tries.

Justyn Olson, a junior guard from LaGrange High, added 14 points and led the team with six assists while also pulling down five rebounds and coming up with three steals.

Senior point guard Mark Wagner only had four points, but he did a nice job distributing the ball with seven assists, and he had five rebounds and two steals.

LaGrange College head coach Kendal Wallace was pleased with the way his players moved the ball.

“We shot the ball extremely well tonight and played as a team,” Wallace said. “Drew had a great overall game and the 26 assists we had is incredible.”

The Panthers were relentless in the first half as they soared to a 52-28 lead.

They pushed the pace offensively, and their pressure defense gave the Hawks fits.

In the first half alone, the Hawks turned the ball over 17 times, and those turnovers resulted in a bunch of points for the Panthers.

No one had a hotter hand in the first half than Vanderbrook, a 6-foot-8 junior from Clearwater, Fla. who was all but unguardable.

The Hawks held a 5-4 lead less than four minutes into the game, and that’s when the Panthers took off.

After the Hawks scored to go up by one, the Panthers pushed the ball up the court, and Vanderbrook drained a 3-pointer with 16:35 left in the half to give his team a 7-5 lead.

The Panthers didn’t look back.

By the time Vanderbrook made another 3-pointer midway through the first half, the Panthers were already up by 20 points.

The Hawks got within 15 points with a minute remaining in the half, but Vanderbrook hit back-to-back 3-pointers to push the lead back to 21.

Wagner made a layup right before the close of the half to cap a 9-0 run and give the Panthers a 24-point lead.

The Hawks got within 11 points midway through the second half, but the Panthers had no intention of letting loose of their grip on the game.

Vanderbrook, fittingly, hit a jump shot to put the Panthers back up by 13, and Ford and Elijah Abedoyin followed with 3-pointers to make it a 19-point game.

The Panthers continued to pull away, and the only suspense remaining was whether they’d make it to 100 points.

The Panthers reached that mark when Michael McCauley, one of the many bench players who got a lot of playing time, scored with 28 seconds remaining.

LaGrange College will step out of conference play when it hosts Columbia International on Saturday.