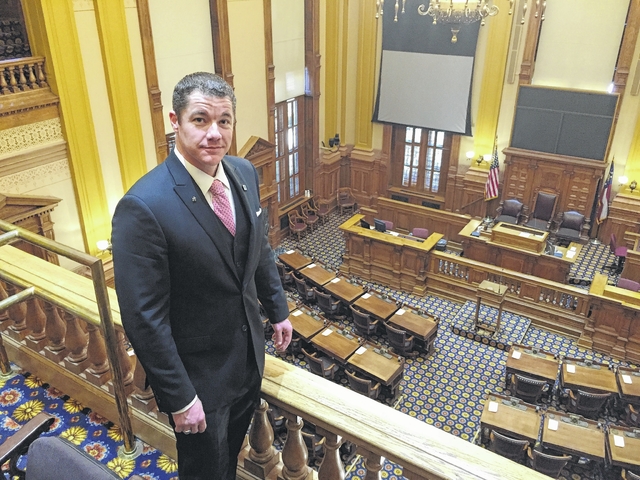 Dale Jackson of LaGrange stands on the same spot where he was in April when legislature voted against his request to add autism on the list of disorders that could apply for Georgia’s medical marijuana registry list. He vowed not to let it happen again this year.

http://lagrangenews.com/wp-content/uploads/sites/37/2016/01/web1_IMG_9859.jpgDale Jackson of LaGrange stands on the same spot where he was in April when legislature voted against his request to add autism on the list of disorders that could apply for Georgia’s medical marijuana registry list. He vowed not to let it happen again this year.

Dale Jackson of LaGrange stands on the same spot where he was in April when legislature voted against his request to add autism on the list of disorders that could apply for Georgia’s medical marijuana registry list. He vowed not to let it happen again this year.

http://lagrangenews.com/wp-content/uploads/sites/37/2016/01/web1_0114JacksonLegislature.jpgDale Jackson of LaGrange stands on the same spot where he was in April when legislature voted against his request to add autism on the list of disorders that could apply for Georgia’s medical marijuana registry list. He vowed not to let it happen again this year.

LaGRANGE — The legislative session in Atlanta just started, but the battle over medical marijuana is already heating up in the halls of the state capitol.

Dale Jackson of LaGrange has been working behind the scenes to help Rep. Allen Peake, R–Macon, prepare House Bill 722.

According to Jackson, HB 722 picks up where HB1, legalizing medical marijuana in Georgia, was left on the cutting room floor after large portions of the proposal failed to pass the Senate.

The more anemic HB 1 was eventually signed into law by Gov. Nathan Deal in April, 2015.

“After they got done removing everything in the bill last year, it was one step above worthless,” Jackson said. “But it did help people, and I’m glad for the 400 people on the state’s medical marijuana registry it did help … now we’re trying to pass a bill that’s worthwhile, that’s more than just a warm and fuzzy press conference for the governor.”

Jackson said HB 722 is more specific and focuses on allowing companies to cultivate marijuana in Georgia with the intent to distribute it for medicinal purposes only.

If passed, Jackson said the bill would authorize state officials to issue between two to six licenses for companies to grow marijuana plants. But those same companies would also be responsible for processing the extract and distributing the cannabis oil as well.

Jackson said the cultivation companies would have to hire a pharmacist and staff them at the facility. The pharmacist would be the only person allowed to sell the medical grade marijuana to legalized card holders in the state of Georgia.

“In that regard, the bill this year is much safer than the bill last year,” Jackson stated.

HB 722 also intends to add three more disorders to the list of diagnoses that enables a person to apply for a medical marijuana card. The new conditions include: autism, Fibromyalgia and PTSD.

Jackson said the proposal will also broaden the definition and limitations of medical marijuana use for patients with end-stage or terminal cancer and allow it to cover all patients diagnosed with cancer.

But Jackson admitted this new proposal does not come without some controversy.

“So many more of the diagnosis that we’re learning about that can use it (cannabis oil), need a higher dose of the THC,” which is tetrahydrocannabinol, the psychoactive ingredient in cannabis, he explained. “So in the new bill, it no longer caps the percentage of THC allowed in a dosage at just 5 percent.

“But the way we’re handling the increased percentage is with a pharmacist on site at cultivation labs when people buy it, they can make sure the right folks have the right prescription and can tolerate that amount of THC,” he added.

Jackson said he expects a lot of push back on HB 722, especially when it goes to the Senate.

“We’re gearing up for an all-out assault,” he stated. “We saw the reaction from across the state … the people of Georgia have stepped up and spoken very loudly. Eighty-five percent of people agreed to the cultivation of medical marijuana … Now we’ve got the speaker of the House on board, and of the 180 House members, Rep. Peake already has 110 as cosigners of the bill.”

Jackson has high hopes for HB 722. He and his wife Sarah were heartbroken last year when autism was taken off the list of disorders that could be treated through the state’s medical marijuana bill.

Their son Colin, 7, has a severe form of the disorder that leaves him unable to speak or communicate with his family, dress himself or perform simple, everyday tasks like brushing his teeth. That is why Jackson is prepared to dig his boots into the ground — alongside Peake and others — and take a firm stance on the new proposal.

“We’re not hoping for anything, but we’re demanding everything that’s in that bill right now, if not more,” he said. “I do not think it will be easy, but I do think it will happen. We actually have more support this year than we did last year.”

In the end, Jackson and others hope to add more names to the Georgia Medical Marijuana Registry list, including Colin.

“I obviously hope this will be the year that we can add one more tool to try and help him find his voice,” said Jackson. “It may not work … but I think it will.”

Jackson said the first reading of HB 722 may be held as early as Thursday.