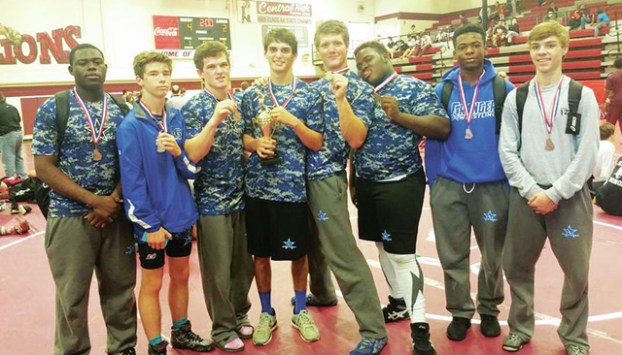 With his teammates and coaches looking on, LaGrange’s Chase Sams wrestles during a match earlier this season. Sams and the Grangers will compete in the state duals today. Kevin Eckleberry | Daily News

http://lagrangenews.com/wp-content/uploads/sites/37/2016/01/web1_LHS-sams.jpgWith his teammates and coaches looking on, LaGrange’s Chase Sams wrestles during a match earlier this season. Sams and the Grangers will compete in the state duals today. Kevin Eckleberry | Daily News

Colt Creed and the LaGrange Grangers finished second in the area duals to qualify for state. Kevin Eckleberry | Daily News

http://lagrangenews.com/wp-content/uploads/sites/37/2016/01/web1_LHS-creed.jpgColt Creed and the LaGrange Grangers finished second in the area duals to qualify for state. Kevin Eckleberry | Daily News

LaGrange High’s wrestling team, after a second-place finish in the area duals, will face Jones County in the first round of the state duals today. Kevin Eckleberry | Daily News

http://lagrangenews.com/wp-content/uploads/sites/37/2016/01/web1_LHS-team.jpgLaGrange High’s wrestling team, after a second-place finish in the area duals, will face Jones County in the first round of the state duals today. Kevin Eckleberry | Daily News

A year ago, the LaGrange Grangers went to the state duals in Macon, won a couple of matches and came away with a seventh-place finish.

The Grangers will look to duplicate or even surpass last year’s performance when they hit the mat this afternoon for their state opener against Jones County.

There are 16 teams in the state duals, and a state champion will be crowned on Saturday.

LaGrange punched its ticket to state by finishing second in the Area 1-AAAAA duals last weekend.

After a semifinal victory over Northgate, LaGrange lost by just three points to Starr’s Mill in the finals.

The Grangers fell short in their quest for an area title, but they did enough to make it to state, which was the primary goal.

“We all wanted to beat Starr’s Mill really bad,” LaGrange’s John Todd Bohn said. “They’re a good team. I think we’re better honestly. But coach (Scooter Weathers) said going into area, our number one goal is to get to the finals, and get to state.”

LaGrange knew it would have to beat Northgate in the area tournament to make it to state.

The Grangers made that happen in convincing fashion, winning the first five matches on the way to a one-sided 49-24 win.

“That was probaby the most pumped up we’ve been all year,” LaGrange’s Chase Sams said. “It was good to get it done.”

LaGrange grabbed momentum right at the start of the Northgate match, and it didn’t look back.

“We were all hyped up (for the Northgate match),” Creed said. “We knew we were going to win.”

Sams, who wrestles at 138 pounds, said once momentum starts going a team’s way, it feeds from one wrestler to the next.

“It just keeps going,” Sams said. “By the time it’s your turn, you’ve just got all this energy. You want to get it done.”

In the finals against Starr’s Mill, Wegienka won by pin in the final match, but LaGrange still came up short, 43-40.

The Grangers, who won the area duals last year, returned home without the championship trophy, but they at least knew that they would be returning to practice the following day with a state tournament to prepare for.

Now, the goal is to make the most of this chance.

First up will be today’s match against Jones County, and if LaGrange wins that one, it would most likely face Woodland-Cartersville on Friday in a winner’s bracket showdown.

“We feel good about our first-round draw,” Weathers said. “We feel we match up with them. The second match, we’d face Woodland of Cartersville. They’re really good. They’re number two in the state. They’re there for a reason.”

LaGrange’s lineup is as settled as it hs been all season.

Like many teams,the Grangers have dealt with weight issues, with wrestlers moving up and down in the lineup.

One of those wrestlers is De’Erious Sands, who is LaGrange’s 106-pounder.

Sands has been unable to wrestle at 106 pounds at times throughout the season, so he’s always mindful of his weight.

“I probably run constantly, and then I weigh myself to see if I’m on weight or not,” Sands said.

Sands, along with the rest of his teammates, is on weight and ready to go today.

“We’re ready,” Sands said. “It helps to have a full lineup.”

The lineup has been augmented by the presence of senior Dakota Wilson, who began the season at Troup before transferring to LaGrange after Christmas.

Weathers got approval from the Georgia High School Association for Wilson to wrestle, and he was in the lineup for the area duals.

“The first week, it was a little weird,” Wilson said. “Then right before area I got to where I knew everybody’s name. I like it. I like everybody over here.”

Wilson isn’t sure where he’ll be in the lineup today, but he’ll be ready to go when his name is called.

Weathers said this team has been led by a talented and committed group of seniors.

“It’s a good group of seniors,” Weathers said. “You miss every senior group. You spend more time with them than your own kids it seems like for four years. This is a really good bunch of kids. They’re a special group.”

Among those seniors is Mann, who was the only LaGrange wrestler to make it to the state finals last year.

Another senior is Wegienka, who is having a phenomenal season, and he has won three consecutive individual tournament titles.

“Guy’s been one of the best captains I could ever ask for,” Weathers said. “He’s the one that pushes everybody. There have been times where we’ll have four, five six mats going at a time, and I tell him, I need you. He’s run a couple of mats this year. He knows what he’s doing.”

All of the wrestlers, seniors and otherwise, are ready for the state challenge.

“We’re really excited,” Sands said. “We should win the first round if everybody does what they have to do.”

After the state duals, LaGrange will return to the mat on Wednesday for the county championship that will be held at Troup High.

Academy gets big home win By Kevin Eckleberry keckleberry@civitasmedia.com LaGrange Academy’s Will Trotter drives to the basket during the first... read more