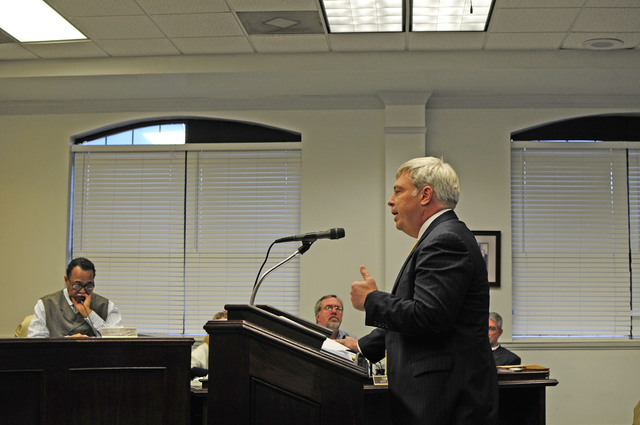 Charles Conerly, a Carrollton-based attorney, addresses LaGrange City Council on Tuesday. Conerly has been retained by a group of residents affected by a proposed connector from Vernon Woods Drive to Cameron Mill Road, which they believe is the result of a private deal to benefit the landowner.

http://lagrangenews.com/wp-content/uploads/sites/37/2016/01/web1_web0113ConnectorConerly.jpgCharles Conerly, a Carrollton-based attorney, addresses LaGrange City Council on Tuesday. Conerly has been retained by a group of residents affected by a proposed connector from Vernon Woods Drive to Cameron Mill Road, which they believe is the result of a private deal to benefit the landowner.

LaGRANGE — Landowners potentially affected by a proposed connector road have raised more questions and concerns over what they say is a back-door deal for the road with lack of public input.

The project, dubbed the northwest connector, is planned to connect Vernon Woods Drive off of Vernon Street to Cameron Mill Road. The city is managing the project using countywide special-purpose, local-options sales tax, or SPLOST, funds. Residents had previously raised concerns that the city appeared to already be clearing land for the project prior to announcing the proposal at its Aug. 25 meeting.

Charles Conerly, a Carrollton-based attorney, has been retained by the various property owners to speak on their behalf. He address City Council on Tuesday, addressing a letter from the city and county attorney responding to previous questions on the project. Although he thanked the attorneys for addressing some of their previous concerns, he said it also raises more questions.

“It is becoming more apparent to us that the real issue lies with the closed process that was used to conceive this project, to design this project, the lack of official oversight and the lack of public input into the approval of this project,” he told council members. “In other words, it appears that this project was conceived, and that the planning for this project has been done behind closed doors, with significant influence from a third party, private developer. With little supporting data or justification, with no public demand and no public input from the community or the affected neighbors. … And yet substantial public money in the way of SPLOST funding is going to be spent in building and designing this road.”

The Callaway Land Trust, which owns the majority of the land where the connector road would run, is slated to donate the right-of-way land and $2 million of the estimated $4.5 million project.

“I would submit to you that there are 176 road projects recommended in the 2006 countywide transportation plan, none of which are this project that has been proposed,” he said. “Again, as originally conceived and as endorsed by this plan, and as endorsed by a 2008 study funded in part by Georgia Tech — as originally conceived, the connector was to be further down from downtown LaGrange or further out, approximately 1 mile from the beginning and ending points of what has now been proposed.”

He asked if any traffic studies back up the current proposal, and noted the potential effect on traffic for parents dropping off students at Hollis Hand Elementary School, near where the road is planned to connect. Although city and county officials said staff would evaluate alternative options, Conerly questioned how those alternatives could be effectively considered and studied if the plans are 75 percent complete, as he noted from the city and county’s letter.

“Again, this appears to be a project born of private conversations between the county and city and a private property owner and developer,” he told council members. “Now the benefits to the property owner are obvious and substantial, but with no traffic study, no quantitative data, no cost-benefit analysis — the project’s public value and benefit are not measurable and may in fact be minimal, and certainly can’t be prepared with any potential alternatives. And I conclude with this — is it the normal course of business to use public funds and equipment on private property in furtherance of a project that hasn’t been approved?”

Mayor Jim Thornton thanked Conerly for bringing the residents’ concerns to the council and said city staff are evaluating options and he expected a report or recommendation. He said council would notify the public when the report is ready.

“We do think there is a tremendous public benefit to the road,” he said. “We are evaluating options, and as the mayor said, hopefully in the next few weeks we’ll have a recommendation to the City Council and County Commission.”