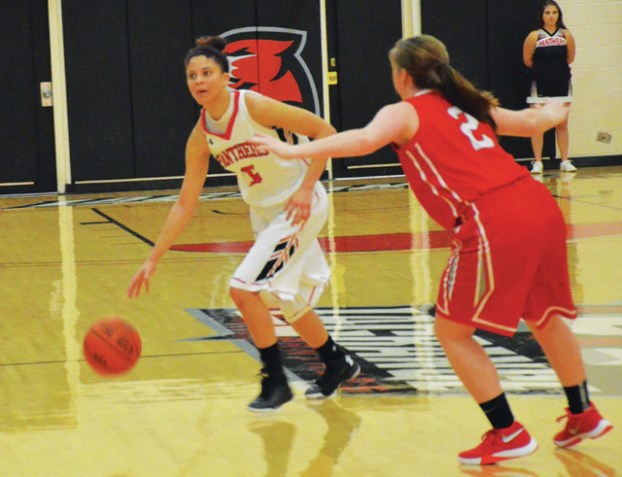 Kelsey Mitchell led LaGrange College with 12 points, and she was 3-of-3 on 3-point attempts. Kevin Eckleberry | Daily News

http://lagrangenews.com/wp-content/uploads/sites/37/2016/01/web1_LC10.jpgKelsey Mitchell led LaGrange College with 12 points, and she was 3-of-3 on 3-point attempts. Kevin Eckleberry | Daily News

LAGRANGE – A fast start helped the LaGrange College women’s basketball team soar to a conference win while putting an end to a two-game losing skid.

Facing visiting Huntingdon College on Wednesday, LaGrange College surged to a 19-7 lead after the first period, and it went on to claim a 64-55 victory in the USA South game.

The Panthers (8-4 overall) improved to 2-1 in USA South play, while Huntingdon (5-7 overall) remained winless in the conference at 0-5.

“This was a really hard-fought game tonight,” LaGrange College head coach Lee Buchanan said. “Huntingdon is a good team and it was a battle all night long. I was really pleased with how we shot the ball tonight and each player that saw action contributed with points and rebounds. We also shared the ball well with 16 assists on 21 baskets.”

As has been the case throughout the season, it was a balanced offensive effort, with 10 different players scoring at least two points.

Senior guard Kelsey Mitchell scored 12 points, and she had an efficient shooting night.

Mitchell made three of four attempts from the field, and she was perfect on her three 3-point attempts, and she was also 3-of-4 from the free-throw line.

Hannah Landers provided a spark off the bench with 11 points, and she was 3-of-4 on her 3-point attempts.

Lauren Johnson, who was 5-of-7 from the free-throw line, added 11 points, and Marilauren Farr scored eight points.

After falling behind 4-0 moments into the game, the Panthers caught fire.

Beginning with a Farr basket, the Panthers went on a 15-1 run, and by the time the first quarter ended, they had a 19-7 lead.

Mitchell helped the Panthers get off to such a quick start with six points in the first quarter, and she knocked down a pair of 3-pointers.

The Panthers stayed hot in the second quarter, and they took their biggest lead of the game at 24-9 when Barker made a layup with 7:15 to play in the first half.

In the second quarter, it was Landers giving the Panthers a lift with a pair of 3-pointers.

By the time the first half came to a close, LaGrange College had a 37-24 lead.

The Lady Hawks tried to mount a comeback in the third quarter.

Huntingdon used an 8-0 run to start the second half to get within five, but LaGrange College responded with a 13-0 run that put the game away.

Landers jump-started the run with a 3-pointer, and Jeris Johnson scored five straight points to finish the run, and the Panthers had a 52-34 lead.

The Panthers led 53-37 by the time the third period came to a close.

Huntingdon hung around in the fourth quarter, but it was unable to get any closer than nine points.

LaGrange College will be back at home on Saturday for another USA South game, this one against Meredith, with tip-off set for 2 p.m.

Academy gets big home win By Kevin Eckleberry keckleberry@civitasmedia.com LaGrange Academy’s Will Trotter drives to the basket during the first... read more