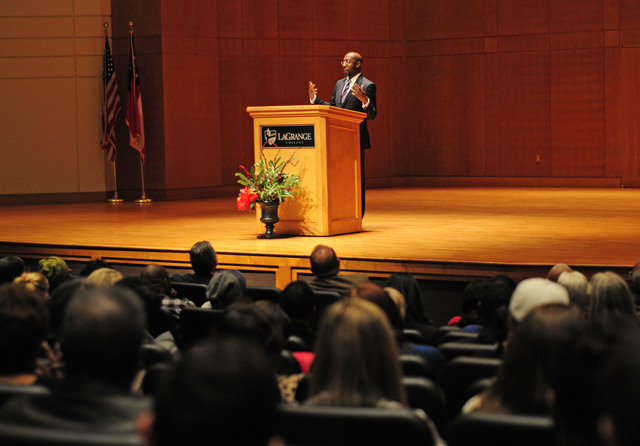 LaGRANGE — The pastor at the home church of the Rev. Martin Luther King Jr. didn’t mince words during a speech at Callaway Auditorium on Thursday, calling for an end to class inequality — continuing the efforts King started.

Warnock noted that during a particularly heated campaign season, the divisive language of politicians seems aimed at driving people apart over ideology instead of bringing them together. He warned against political rhetoric that maligns the poor, calling for understanding and a “from the bottom-up” change in policy to help bolster economic classes.

“We have to make work pay,” he said. “There is this contradiction in American politics right now. There are these politicians that moralize about the importance of work, and yet they won’t make work pay. … It’s a contradiction to say that everyone ought to work, but not fight to make sure they have a living wage.”

Citing the U.S. Department of Justice report on the Ferguson, Missouri, incident where police shot and killed an 18-year-old, unarmed African-American man, Warnock said that governments make a living off the poor through focused traffic stops and fines to generate revenue. He said it’s a stark contrast to the perception that the poor live off the government.

He also called it “expensive to be poor,” saying those on low wages face tough choices, like missing work to take care of a sick child because they don’t have access to child care, or lack of public transportation to get to work if they can’t afford the costs of a personal vehicle.

Warnock criticized the Georgia government’s refusal to expand Medicaid, saying not only is it punishing low-income people seeking health care, but it’s punishing the state — costing it money through the loss of revenue that some studies projected could come from expansion. He called the expansion not just a moral, but economic decision.

“The truth is that many of the people we call middle class are actually poor,” Warnock said. “… So don’t let people malign poor people and call themselves followers of Jesus Christ.”

Warnock said he grew up a poor child with a father who operated a junk yard and was a preacher on Sundays. He compared his father’s work of moving cars that people had thrown away to teaching on Sundays to those that he said society had cast aside.

When Warnock decided he wanted to go to Morehouse College, he quickly realized he didn’t have the family money that many of the other students possessed. He worked hard to make his way through college, but said he still wouldn’t have been able to afford it without the federal Pell grant.

“We need to invest in the people of this country,” he said.

Criminal justice reform also is a “bottom-up” solution that would help eliminate the cycle of recidivism and racial bias in misdemeanor arrests for things like marijuana, he told the crowd.

Despite his criticisms, Warnock noted that “like Dr. King, I still have undaunted faith in mankind.” People need to work together instead of against each other, and listen with open minds to one another, he told the group of mixed races and ages at the auditorium.

Referring to the 2012 shooting of 17-year-old Trayvon Martin, Warnock noted that the teen had a pack of Skittles candy in his pocket. He pointed out that Skittles contain multiple colors together, and opined that they are best enjoyed collectively.

“What I’m trying to tell LaGrange is — to taste the rainbow,” he said with a smile, as the crowd erupted in laughter and applause.